The Syrian opposition has opened its first embassy just one day after they took Syria’s seat at the Arab League, replacing the Bashar Al-Assad regime, and Damascus reacted angrily to the promotion of the Syrian rebels by the Arab League 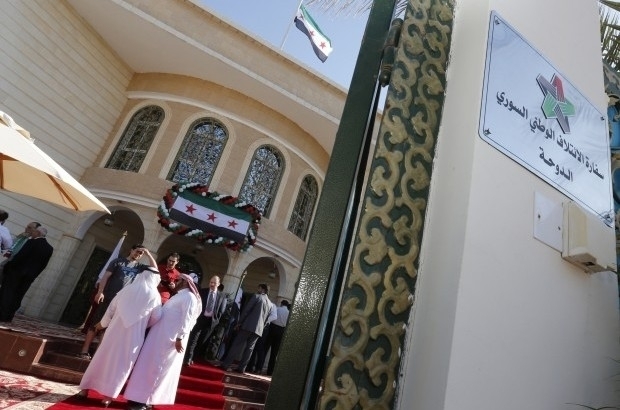 The Syrian opposition has opened its first embassy just one day after they took Syria’s seat at the Arab League, replacing the Bashar Al-Assad regime as the legitimate representatives of the Syrian people.

In a speech at the opening of their embassy in Doha, Qatar, Syrian National Coalition leader Moaz Al-Khatib proclaimed, “This is the first embassy of the Syrian people.” The ceremony saw the opposition’s flag being raised above the embassy.

Al-Khatib used the occasion to voice his frustrations at world powers for failing to do more for the Syrian revolution. He said, “There is an international willingness for the revolution not to triumph,” adding, “the only way to victory is unity.”

Nizar Al-Haraki, named by the Syrian National Coalition as its ‘ambassador’ to Qatar in February, revealed that he will “soon” officially present his diplomatic accreditation to the emir of Qatar and formally take up his post as ambassador.

Speaking exclusively to Asharq Al-Awsat, the Syrian ambassador emphasized that “this honor comes after 40 years of patience. The opening of this embassy removes the fig leaf from the regime until it completely collapses, particularly as the coalition’s forces are winning at home.”

He added, “We are advancing politically and diplomatically, and we thank Qatar for this triumph. We will now be able to serve our people, who need the Arab countries to stand with them. We also thank all the countries that stood with us, particularly the Kingdom of Saudi Arabia, the United Arab Emirates, Kuwait, Egypt and Turkey.”

Haraki also stressed that “the Syrian people need all Arab countries to stand with them, particularly as the fighting is still on-going two years after the revolution.”

He said that the Arab world must stand strongly with the Syrian rebels to inject new blood into the Syrian popular revolution, adding that the Syrian National Coalition must also begin to increase its diplomatic work.

The ambassador asserted that Qatar has responded to all of the coalition’s requests, treating the opposition umbrella group as the legitimate representative of the Syrian people.

He added that the Syrian National Coalition is seeking to be officially recognized by other states and allowed to take over Syrian diplomatic functions, such as granting visas, particularly as there are large communities of Syrian expatriates in the Gulf.

Damascus reacted angrily to the promotion of the Syrian rebels by the Arab League and Qatar. The Syrian government issued a statement accusing the Arab League of going too far in “giving Syria’s seat at the [Arab] summit to an illegitimate party and raising a flag other than the Syrian national flag,” stressing that this was a “flagrant violation of the Arab League Charter and its statues.”

The Assad regime reiterated its warnings that “those countries that play with fire though arming, funding, training and harboring terrorists will not be safe when this fire stretches to them.”

The government statement concluded that “Syria completely rejects the Doha summit resolutions on Syria and all the dangerous repercussions that could result from this, preserving its right to take whatever measure it sees fit in defense of its sovereignty and the interests of its people.”