Rumors say government is 'cleaning' Dardari, preparing him to gain a position in the opposition, as part of a political trick targeting the revolution 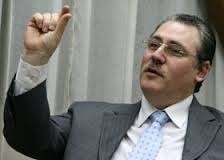 What has long been known was confirmed this week when the contradictory manner in which the regime has dealt with Abduallah al-Dardari became public.

The Syrian regime started a media campaign against the former Deputy Minister for Economy and Trade in 2011, accusing him of being responsible for the economic deterioration of Syria.

More recently, rumors have emerged of his reconstruction plan for Syrian infrastructure and economy. On Sunday he visited Syria to discuss the project with the Syrian regime. The regime honed in on his statements, while the media largely concentrated on the fact that he was meeting with the regime.

Many Syrians expressed astonishment that Dardari was received by the regime, considering the accusations made against him two years ago. Others meanwhile suspected the campaign was connived as a way of 'cleaning' Dardari, preparing him to gain a position in the opposition, and as part of a political trick targeting the revolution. These suspicions are aroused by the fact that Dardari, of Damascene origins, is respected by a wide spectrum in the opposition, including from the Coalition wing as well as Michel Kilo's wing. He is also acceptable to Iran due to his previous cooperation with Iranian companies when he was in office.