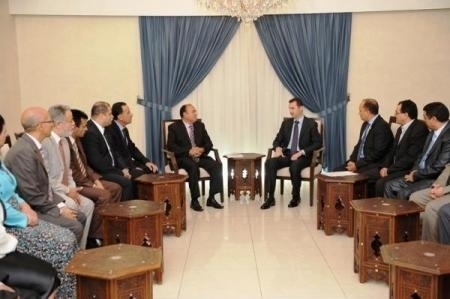 President Bashar al-Assad on Thursday said there was a need to combat extremism and foreign plots in the region at a national and pan-Arab level, while meeting with a visiting Tunisian delegation in Damascus.

Assad briefed the delegation on the dimensions of the crisis in Syria and the firm government stance against terrorism, with all its regional and international supporters, as well as the efforts towards a political solution to the crisis.

Delegation members said the Tunisian people stood in solidarity with Syria, acknowledging Syria's resolve, unity and military strength in the face of a foreign conspiracy and aggression led by Israel, the West and their regional allies.

Members said such aggression targets Syria as a bulwark of resistance and commitment to the fundamental Arab cause.

They described Syria as "the last stronghold of Arab nationalism," expressing confidence that Syria will emerge from the crisis victorious, under Assad's leadership.

They also expressed regret and sadness that some wayward Tunisians had joined the fighting in Syria, stressing that most Tunisian people understand the reality of what is taking place in the country.