British and French pressure overturns ban, but EU agrees to wait for talks before supplying arms 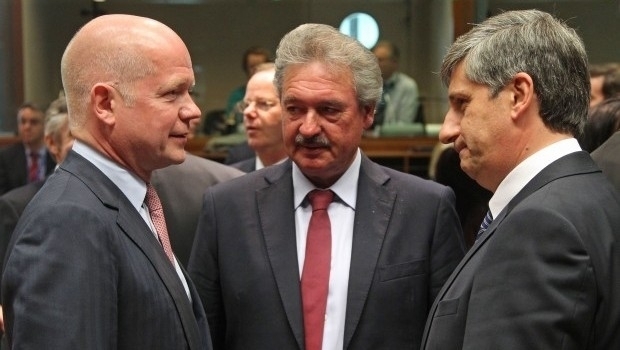 The EU dropped its arms embargo on the Syrian opposition yesterday after a meeting of foreign ministers in Brussels ended without agreement.

Without a unanimous decision among member-states to either extend or lift the embargo, the existing ban will expire on Friday.

However, according to a statement released by the EU’s foreign policy chief, Baroness Catherine Ashton, on behalf of the EU’s foreign affairs council, member-states will not supply any weapons “at this stage,” though this decision is due to be revisited before August 1.

This means that states will await the outcome of the peace talks on the Syrian crisis proposed by Russia and the US before taking action. However, no details have emerged yet about if or when the talks will be held.

Under the terms agreed in Brussels on Monday, the EU retains the arms embargo in place on the Syrian government, as well as financial and economic sanctions. Any weapons supplied to the Syrian opposition in the future are to be supplied “for the protection of civilians,” and should be subject to “adequate safeguards against misuse.”

Britain and France were reported to be the two states that pushed for an end to the embargo, in order to allow arms to be supplied to the rebel groups fighting to bring down the government of Bashar Al-Assad.

Both argue that this will pressure Assad to accept a negotiated solution to the conflict.

British foreign minister William Hague told reporters: “EU nations agreed to bring the arms embargo on the Syrian opposition to an end. This was the outcome that the United Kingdom wanted. It was a difficult decision for some countries, but it was necessary and right to reinforce international efforts to reach a diplomatic solution to the conflict in Syria.”

Hague reportedly took the lead, blocking a compromise deal during the 12-hour meeting. After this, the 25 states who were not amenable to the British and French stance agreed to the new position in order to retain some degree of unity on the issue despite their objections.