Syrian cartoonist Akram Raslan wins the Cartoonists Rights Network International Award for Courage in Editorial Cartooning for 2013 while he is in prison, waiting for his trial 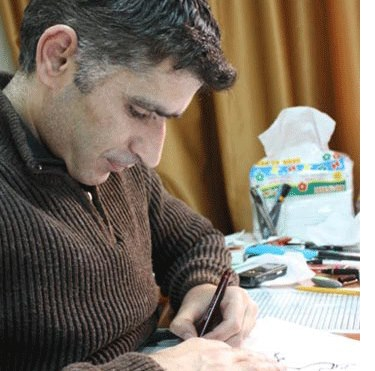 President of the Board of Directors of the Cartoonists Rights Network International announces that the recipient of the Award for Courage in Editorial Cartooning for 2013 is Syrian cartoonist Akram Raslan.

Mr. Raslan was arrested by Syrian authorities at the offices of his newspaper, Al-Fida in the city of Hama, Syria approximately 6 months ago.  He has been held incommunicado since then.  A reliable source reports that he has been tortured and abused, deprived of any legal counsel, and is now to be put on trial in a special court that has been created for enemies of the state.

His trial is scheduled for June 3, 2013.  The charges against him are derived from his cartoons that have been critical of Pres. Bashir al-Assad and his conduct of the war currently raging in Syria. According to our source the charges range from collaboration with the rebel groups, working against Syria's Constitution, insulting the country's president, incitement to sedition, promoting revolt against the public order, and undermining the prestige of the Syrian state.

CRNI gives Akram Aslan our annual Award for Courage in Editorial Cartooning in recognition of his extraordinary courage in confronting the forces of violence with cartoons that told only the truth.

CRNI calls upon the Syrian government to drop these charges against Mr. Raslan, and restore him to his family.

Mr. Raslan's award will be presented at the annual convention of the Association of American Editorial Cartoonists taking place in Salt Lake City, Utah USA on June 29, 2013.