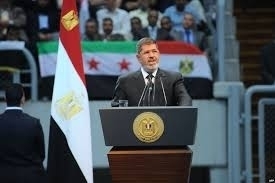 By cutting off relations with Syria, Egyptian President Mohammad Mursi has joined the Israel-U.S. band of conspirators, an official Syrian source said Sunday.

Mursi announced on Saturday that he was cutting off all diplomatic ties with Syria, closing the Syrian Embassy, and withdrawing the Egyptian charge d'affaires.

The source said Mursi's position was a clear reaction to the recent gains made by the Syrian Arab Army against terrorists across operating in the country.

Syria condemned Mursi's position as "irresponsible," saying it reflected his "attempts to implement the Muslim Brotherhood's agenda" in a bid to deflect from his own people's demands domestically.

"Syria is confident that this decision does not reflect the view of the brotherly Egyptian people who have shared strong and firm relations with the Syria, which has contributed to the security and stability in the region against invaders and aggressors since the dawn of history," the source said.

The source added that ties between the Syrian and Egyptian people "were crowned by the October Liberation War which, an important victory for the Arab nation over the Israeli enemy."

Mursi, the source said, should show this level of excitement when announcing "the closure of the Israeli embassy and cutting off ties with the enemy that is still killing Palestinian brothers right before his eyes and just a short distance from Egypt."