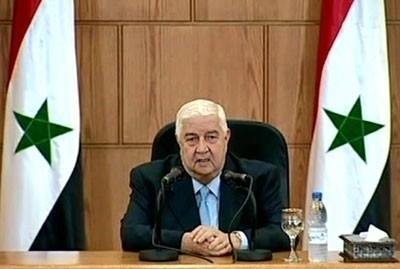 The main Syrian opposition group has criticized Foreign Minister Walid Muallem for his "denial" of chemical weapons use by the Syrian government and for false claims ahead of a proposed peace conference.

The foreign minister, at a press conference Monday said the Syrian President Bashar Assad will not step down at a proposed peace conference in Geneva, but will only discuss the formation of a national unity government.

Muallem also slammed a decision by supporters of the Syrian opposition to arm the rebels, saying it would only prolong a conflict, already in its 28th month.

"President Bashar Assad will not resign. If your condition (for talks at Geneva) is President Assad's resignation, don't bother coming," he said, according to the Syrian news agency SANA.

"We will head to Geneva not to hand over power to the other side… We will go to Geneva in order to set up a real partnership and a broad national unity government."

But the opposition has said that any solution to the conflict must involve Assad's departure, something the regime has repeatedly ruled out.

Muallem also lashed out against a decision by the Friends of Syria group of Arab and Western governments that back the opposition to step up their assistance to the rebels.

"Two days ago a conference (of the Friends of Syria group) was held in Doha. They emerged with a clear decision to arm the opposition…This will only prolong the crisis," Muallem was quoted as saying by SANA.

Muallem warned that any arms provided to the opposition would end up in the hands of the Nusra Front, a rebel group that has openly proclaimed its allegiance to Al-Qaeda and is on Washington's terror blacklist.

"I only want to say that what was decided in Doha is dangerous because it aims at prolonging the violence, and it encourages terrorism," he said.

The Syrian National Coalition lashed out at Muallem’s remarks, rejecting as false his claim that the purpose of attending talks is to "build a real partnership” leading to a government of national unity representing all Syrians.

Furthermore, they said, "he denies any involvement of Assad’s forces in using chemical weapons.”


The Coalition said in a statement Monday that the Assad regime “is stalling for time by attending Geneva II. For Assad, this creates an opportunity for more destruction and for the Assad forces to gain more ground in Syria.”


Muallem’s denial of Assad’s use of chemical weapons comes after myriads of video footage, reports, testimonies of witnesses, and western governments’ affirmations of chemical weapon usage against innocent civilians, the statement went on as saying.


The Syrian Coalition stressed that arming the Free Syrian Army will “help defend the Syrian people against state terrorism, as Hezbollah and other sectarian paramilitary troops join the fight against Syrian civilians.”


But the Coalition reiterated its “commitment to a political solution that stops bloodshed, leads to a democratic, civil Syria, and meets the aspirations of the Syrian people for freedom and dignity.”


“We emphasize the importance of excluding Assad, and those around him who are also guilty of crimes against the Syrian people, from Geneva II. In fact, the international community must put in place steps to prosecute those who have violated any human rights conventions,” the statement added.