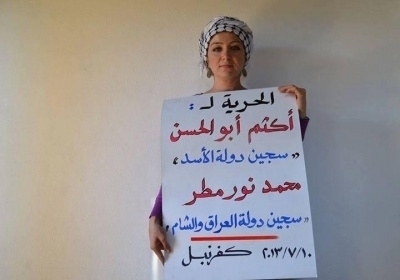 An Islamist group linked to Al-Qaeda has arrested 1,500 activists in Raqqa, northeast Syria, in a continued series of abuses of human rights by the Islamic State of Iraq and Ahrar al-Sham groups, Zaman al-Wasl has found.

A sources from the city said that the real number arrested is more like 200 people. Crossed sources said 500 people were arrested, but Zaman al-Wasl sources confirmed the huge number of 1,500.

An eyewitness and former detainee in the detention chambers revealed different types of torture, similar to those used by the Assad regime, including the "bsat al-reeh” torture device, is being used in the facility. Former detainees have said it has been used to immobilize and severely stretch or bend limbs.

But according to an activist working with the Syrian National Coalition- the main stream opposition body considered as the enemy for the Islamists  – the new Islamic 'state' has prepared list for arrest of secular youth not fasting in Ramadan and anyone who participated in protests against the new Islamic state in Raqqa.