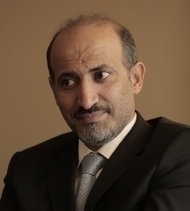 The new head of the main Syrian exile opposition group says he is prepared to attend a peace conference in Geneva with representatives of President Bashar al-Assad of Syria without preconditions.

But the group’s new president, Ahmad al-Jarba, said in an interview in New York on Saturday that he wanted assurances that there would be a deadline for making progress, the New York Times has reported.

Mr. Jarba, who met last week with Secretary of State John Kerry, said that he would not propose a specific deadline until the talks are closer at hand. But Burhan Ghalioun, a Syrian opposition member who participated in the meeting with Mr. Kerry, said that the opposition believes “Geneva must accomplish something in the first six months.”

Asked about Mr. Jarba’s comments, senior American officials said there was agreement in the meeting with Mr. Kerry that the goal of Geneva would be to pursue a political solution as quickly as possible, but “there was not a time frame set.”

“We will lose all credibility if the regime draws us into three or four years of talks, which have no substance,” Mr. Ghalioun said.

Mr. Ghalioun said the opposition had told Mr. Kerry in their meeting that such steps also needed to include an end to artillery attacks, airstrikes and missile launches by the government forces.

Mr. Jarba said that Mr. Kerry had mentioned that the opposition could put Mr. Assad on the defensive politically by attending the talks. But Mr. Jarba said he had little confidence that the Geneva talks would yield a breakthrough.