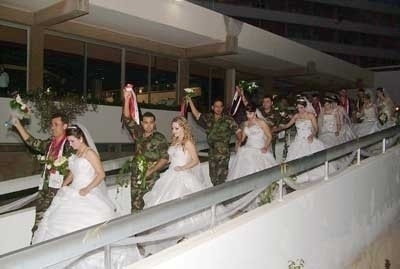 A mass wedding ceremony was held in Lattakia province for 15 soldiers with the Syrian Arab Army amid a huge civilian and official presence.

Members of the regional leadership of Baath Arab Socialist Party, Khalaf al-Muftah said the ceremony was an expression of appreciation of the heroic and brave soldiers who are confronting armed terrorist groups and restoring security and stability to the homeland.

The grooms expressed their joy for the weddings, in which all provincial residents took part, particularly in the current circumstances.