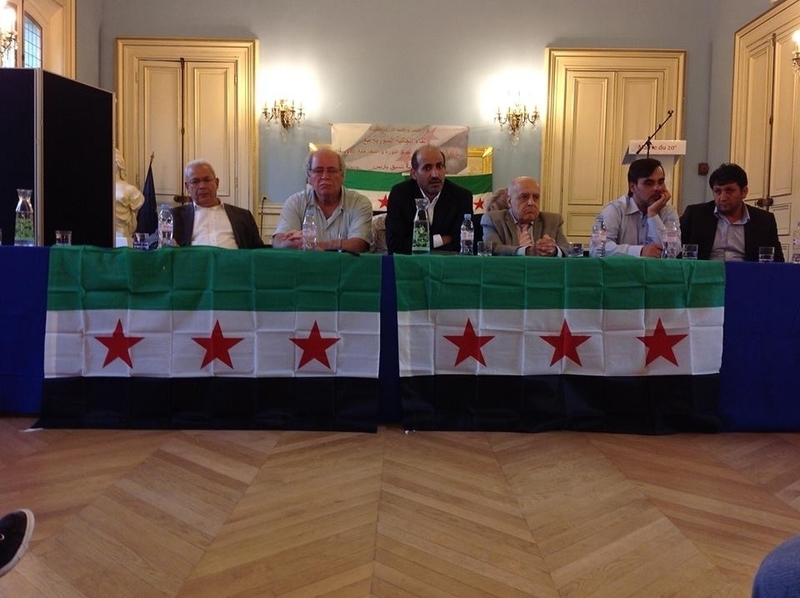 Amid tight security and a heavy police presence in Paris on Friday, the head of the Syrian National Coalition Ahmed Jarba met with members of the Syrian community in France.

Jarba discussed the fragmentation of the Syrian opposition, going in to detail about the form of the unified opposition, while avoiding discussion about the causes and remedies for the disunity.

Jarba asked all elements of the political and civil opposition to unify, particularly at such a sensitive time, in order to confront the regime and support the people in achieving their legitimate aims of freedom from tyranny.

Jarba also discussed his meeting with the French President Francois Hollande, whose attitude he described as “honorable”.

Jarba talked about the extensive media coverage given to the current political situation in Syria and the support the Syrian opposition had garnered from a large segment of the French population. He described France as one of the “most important friends of the Syrian people”.

Jarba explained in detail the issue of militarization of the Syrian Revolution, agreeing that there is a sense of “chaos” around the issue due to the presence of many businessmen and religious men supporting various factions.

He emphasized that his position reflected the official position regarding armament, but also noted that plans to establish a united National Army under one command had so far not been effective in reducing the disorganization.

The national army was rejected by many factions of the Free Syrian Army, Jarba said, attributing it to general mistrust and competition between factions and their financial sponsors that had produced conflicts of interest.

In the same context, Jarba spoke again of plan for the establishment of a central fund for military support and relief, which would prioritize financial support for certain brigades, saying method for the implementation of the plan would be discussed in coming weeks.

Jarba also said the Syrian regime was resorting to the use of human shields to intimidate the international community, threatening civilian casualties would be a consequence of any military strike against Syria.

Separately, Jarba said Iran is unable to intervene militarily to support the regime, citing the recent war waged by Hezbollah against Israel, in which Iran stood idly by.