Mekdad warns that strikes could set the whole region ablaze 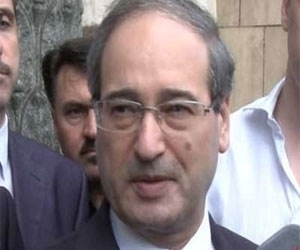 Deputy Foreign and Expatriates Minister Faisal Mekdad has warned of serious consequences for the region if the U.S. launches any military action on Syria.

"The whole Middle East will be set ablaze if the U.S. attacks Syria," Mikdad told the American CBS channel.

"The U.S. accusations against Syria using chemical weapons are not based on evidence," he said, adding that "the U.S. would have submitted its proof to the U.N. if it had any."

"We have submitted clear evidence to the U.N. and Russia that the armed terrorist groups used chemical weapons," he said.

Mekdad said any aggression against Syria will serve the interests of the Nusra Front and the Islamic State of Iraq and the Levant, while the Syrian people will be the victim," referring to the Al-Qaeda linked extremist groups.

Mekdad condemned talk of a possible attack against Syria from Jordan, saying that Jordan is "a sisterly Arab country that should not threaten Syria's security, safety and stability, nor be a conduit for an aggression."

Mekdad confirmed Syria's right to confront aggression and respond by any means.

"The Syrian people stand with their leadership to confront aggression," he said.