Moallem said Syria welcomed the Russian initiative as a way to preserve Syrian lives and infrastructure. 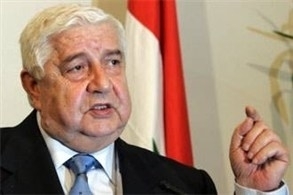 During a meeting on Tuesday with Iranian Deputy Foreign Minister for Foreign Affairs Hossein Amir Abdullahian, Moallem said Syria welcomed the Russian initiative as an extension of the Syrian leadership's responsibility to prevent Western aggression against the country and to preserve Syrian lives and infrastructure.

He said Syria's support for the initiative provided a chance for a political solution to the crisis in Syria, crafted by Syrians themselves without foreign interference.

Moallem underscored the solid relations between Syria and Russia, highlighting the success of his recent visit to Moscow and constructive talks with his Russian counterpart Sergei Lavrov.

He expressed Syria's satisfaction with Syrian-Iranian relations and that Syria appreciated the Iranian position and all that it has offered to bolster Syrian resolve in the face of terrorism from armed groups and their Arab and international backers operating in Syria.

Prime Minister Wael al-Halqi meanwhile stressed the Syrian government's support for the Russian initiative as a way to spare Syrians' lives and the country's security, preventing a war which could spread beyond the region.

"The Syrian government is keen to preserve security and stability, particularly in the Arab region," Halqi said in a Cabinet session on Tuesday.

He said the government "is ready to cooperate with the various international political initiatives which aim to defuse war threats," noting that the Syrian people seek to emerge from the current crisis through national dialogue. He said Syria welcomes any initiative that moves toward such dialogue, particularly  the Geneva II conference.