Camerman Nidal Khattab was killed before the film was released 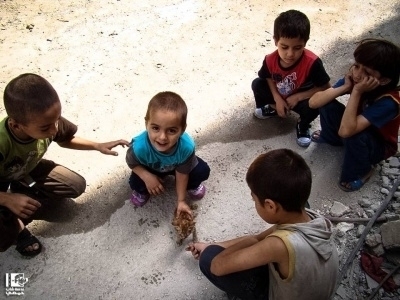 'Bleeding Heart,' a short documentary filmed and produced by the Specialised Media Centre in the Homs Neighborhoods Union tells stories of suffering of the children in besieged Homs.

Sama Homs, a media activist who directed the documentary, worked with camerman Nidal Khattab, who was killed before completing it.

Speaking to Zaman al-Wasl, Sama explained that the idea of the film was born a year ago, aiming to capture the details of children’s lives in Homs.

Security and unstable conditions in besieged Homs, however, had confounded the director on how to film until another friend, Kinan (who was later arrested), told them about a basement, where dozens of children were living.

Sama spoke with clearpain about Khattab, who she said he was known as “The Compassionate.” He had completed filming just two days before being arrested and killed under torture.

“He wanted to broadcast the film on many TV channels, and I was very happy with that, but when he was arrested, the completed version got lost… Maybe it was on his laptop that was taken away at prison,” she said.

She explained an unfinished copy of the film was luckily found and completed with the help of  young men in the Union.

Sama said she was happy that the documentary film was eventually broadcast on the “Syria al-Shaab TV channel, and was supposed to be shown on other TV channels, but there were problems with internet that prevented distribution.

Sama relayed some painful stories and moments during filming, the most memorable being an incident in which they were filming a young girl wearing new clothes who told them she wanted to to die in her new clothes if death came.

Nidal was touched, she said, and  his hands shook so much he was unable to go on filming.

With tears in his eyes, he told her: “I do not want to film, I want to help these children, but I do not know how… my heart is broken,” Sama said.
Sama said they photographed many children but could not present them in film because of technical and security issues. She urged everyone to do his or her best to help children, as the innocents in the war who deserve no punishment.

The activist explained that the filming conditions were very difficult and that many times they were on the brink of arrest.

At one point regime security forces raided the basement and threatened people there, but luckily they were not there at the time.
On title of the documentary, Sama said: “Bleeding Heart is a kind of flower that prefers shade. It is very beautiful as the flower takes a heart shape. When it is cut, it produces a very poisonous fluid, so it resembled those children who might turned into criminal or bad people if they were left without care."

Sama described the miserable living conditions for people in the basement, describing "no more than rows of blocks separating rooms allocated to each family from each other, while kitchen and bathroom were shared."