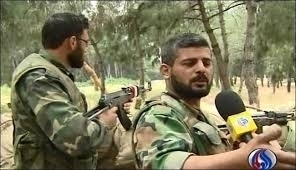 Rebel leaders and activists in the Damascus countryside lanched an appeal via news website Zaman Alwasl for all battalions and FSA brigades to defend the Syrian capital’s suburbs and to break the siege of towns in the Ghouta region.

Colonel Ebrahim al-Heboos, a rebel commander in the Damascus suburbs, said the “loss of the town of Al-Sayyedah Zeinab and its surrounding villages is a big threat to the other rebel-held areas in Damascus that we paid a price in blood to control.”

The Assad fighters, including some from the Lebanese Shia movement Hezbollah and Iraqi Shias backed by Syrian army tanks, searched al-Thiabiya and Husseiniya, a Palestinian refugee camp, for pockets of resistance after overrunning the areas, according to Reuters.

The capture of the two districts, located between the two main highways leading to Jordan, strengthens Assad's hold on major supply lines and puts pressure on rebel brigades that have been under siege for months in areas adjacent to the center of Damascus.