The mini-feature showed her comforting the bereaved and planting olive trees with children, dressed in black trousers and a grey T-shirt 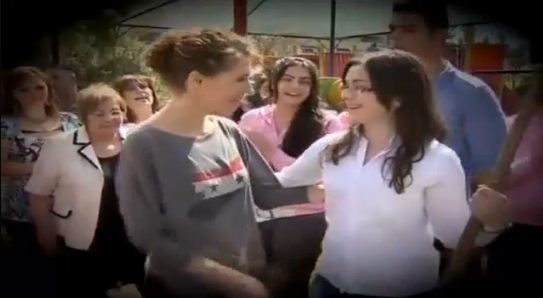 Syria’s first lady Asma al-Assad laughed off claims she has fled the war-hit country in footage broadcast on Tuesday, saying she was standing by her embattled husband President Bashar al-Assad.

The British-educated Asma has rarely appeared in public since the beginning of the conflict in Syria, where more than 115,000 people have been killed since March 2011 according to a watchdog.

But on Tuesday, hours after her husband attended prayers to mark the Muslim Eid al-Adha feast in Damascus, Syrian state television broadcast a clip of the first lady.

The mini-feature showed her comforting the bereaved and planting olive trees with children, dressed in black trousers and a grey T-shirt with the Syrian flag on the front.

“I am here, my husband and my children are here in Syria. It’s obvious that I’d be here with them,” she told reporters, when asked of claims that she had left the country.

“How can I teach my children to love Syria if they don’t live here?” she added with a smile.

“I was here yesterday, I’m here today and I will be here tomorrow.”

There was no indication of when the footage was recorded or where.