Humanitarian conditions are deteriorating in the area due to the siege 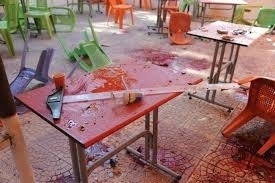 According to a Smart News correspondent, the city of Daraya is exposed to violent artillery and rocket shelling from Mazzeh military airport and tankfire from Daraa.

The shelling has led to significant damage to the homes of civilians.

The correspondent said Daraya's suffering "is increasing and the humanitarian situation is deteriorating" under a sharp shortage of medical supplies to treat the wounded from the daily shelling, in addition to the scarcity of food.

The correspondent added that people depend on spinach and chard, or earth herbs, and a little remaining rice for their food needs. The city also suffers from a shortage of of hydrocarbons and gas; people were forced to use firewood for cooking and heating materials as a substitute.

In Homs meanwhile, regime forces bombed the Waer district with rockets and mortars, in conjunction with heavy mortar fire on civilian homes from barriers surrounding the district and Military Academy, leading to the death and injury of a number of people.

Muhin town in Homs experienced cluster bomb shelling which targetted civilian areas, also leading to the death and injury of a number of people, some of whom are in critical condition.

Al-Ghanto, Houla and Rastan were exposed to shelling by regime forces with various types of weapons but there were no reports of casualties, according to activists.

Meanwhile, Assad forces targeted a passenger bus on the road to Sokhna, which resulted in the death and injury of many civilians. Simultaneously, heavy artillery was fired on the Red Valley area from the castle of Palmyra.

Furthermore, regime forces launched several raids on the Daraa countryside, after the Free Syrian Army tightened its control over large parts of the region.