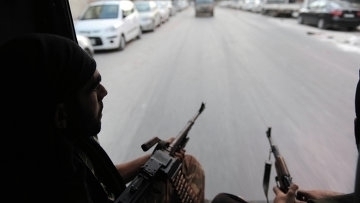 Fierce clashes were witnessed in the towns of Binnish and al-Fuah in northwestern Idleb province recently, over the kidnapping of seven farmers from Binnish orchards by Fuah militants, Zaman al-Wasl sources reported.

While most towns of Idleb are under rebel and Islamist control, al-Fuah and the nearby town of Kafriya constitute an isolated pro-Assad enclave.

The latest kidnapping incident was one of a series between the rival towns. In April 2012 rebels kidnapped eleven members from the regime's Scientific Research Center in al-Fuah. In July 2012 a rebel unit kidnapped three Shia residents from the town for the stated purpose of exchanging them for anti-aircraft weaponry. In response, some al-Fuah residents kidnapped 32 Sunnis from nearby Taftanaz, Saraqeb and Binnish.

After two weeks of negotiations, all captives were safely released, according to the Syrian Center for Documentation.

Syria’s conflict, now into its third year, has left over 115,000 dead. It has devastated the economy and the country’s delicate social fabric. It has caused 5 million Syrians to flee their homes to other places within the country, and driven another two million abroad.