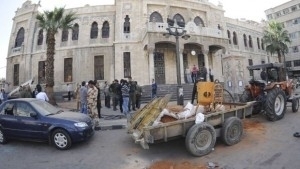 Eight people were killed and 50 others were injured when terrorists detonated an explosive device planted in the central Hijaz Square in Damascus on Wednesday.

A police source told SANA that terrorists detonated an explosive device in front of the General Establishment of Syrian Railways (Al-Hijaz Railway), adding that several people were killed or injured in the attack, among them a number of workers who were carrying out maintenance work on the building.

A source at Damascus Hospital said that eight bodies and 50 injured persons were admitted to the hospital, adding that children and women were among the women.

Another eight people were killed and others injured in a terrorist attack using a car bomb near al-Omran roundabout in central Sweida city.

A police source said that terrorists detonated the car bomb near al-Omran roundabout, claiming the lives of eight peple and injuring 41, in addition to causing material damage to passing and parked cars.

A source at  the Sweida Health Directorate said that hospitals in the city received the bodies of eight people and that 41 wounded people were admitted to hospitals and are receiving treatment.