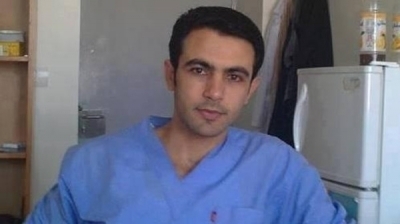 The opposition Syrian National Coalition has condemned the killing of Dr. Hussein al-Suleiman, also known as Abu Rayyan, by the Islamic State in Iraq and Greater Syria (ISIS) Sham in Tel Abyad in Raqqa Province.

Suleiman, a member of the insurgent faction Ahrar al-Sham, was held for 20 days, tortured, and executed.

The Coalition said: ''We reiterate that ISIS is a terrorist organization with close connections to the terrorist Assad regime. It has become clear that ISIS is an enemy to the Syrian people, shedding Syrian blood and killing innocent civilians on numerous occasions”.

The Islamic Front also issued a statement denouncing ISIS over Suleiman’s death. It has said that, despite a “truce” with ISIS, the killers must be handed over for justice.

The Coalition called on those who have joined or allied with ISIS, thinking it is a group committed to the goals of the revolution, to leave the group immediately. ISIS has its own agenda, it said, which neither serves the revolution, nor the Syrian people’s interests.

Ahrar al-Sham's media office reported that Abu Rayyan along with 20 fighters from Ahrar al-Sham were captured by ISIS when clashes broke out between the two groups.

The reasons behind the fighting, according to Ahrar al-sham, was that ISIS, for no apparent reason, attacked one of their checkpoints and killed six fighters from Ahrar al-Sham.

After a prisoner exchange agreement between the two sides on Tuesday, ISIS handed over the body of Abu Rayan, who had been executed by firing squad.