Syrians are invincible in the face of any injustice 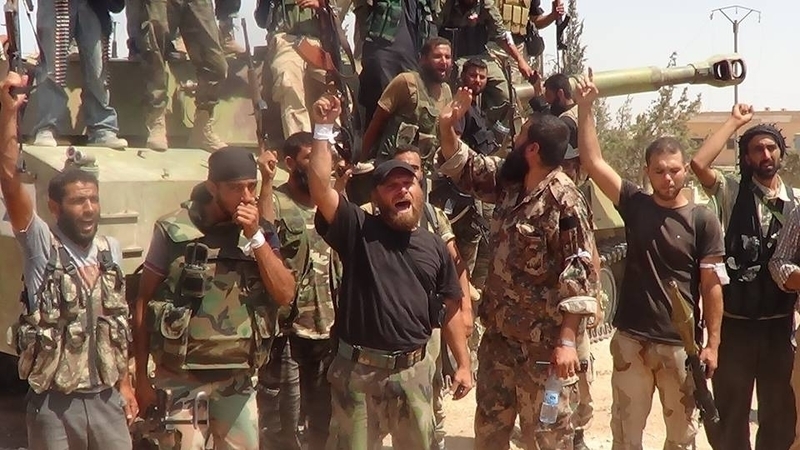 When the Islamic State for Iraq and Greater Syria (ISIS) came to Syria, the latest group to try to take a share of the Syrian pie, it created many problems, waged battles, and created bitter conflicts between rebels and the civilians.

ISIS quickly revealed on their true identity and ambitions; wanting to take full control of Syria.  They revealed their aggressive stance toward civil society through attempts to force society to give up what they labeled as "infidelity" and enforce their religious doctrines.

They brazenly turned everything, regardless of whether it was public or private, in to war spoils.

ISIS have created conflict between the rebel forces, destroying their strength and power, killing commanders and activists in ways that mirror the Assad regime’s tactics.

They raided rebel operation rooms and stole weapons, including two tanks that were taken from the Syrian Rebel Front.

ISIS first attacked the FSA in Azaz and Bab Salameh, on the Turkish-Syrian border. They later took Tal Abbyad in Raqqa and killed Abu Rayan, a doctor, in the Turkman mountains.

The Syrian Observer asked Hussien, a commander in the FSA brigade Draa Al-Fateheen, about why the FSA declared war on ISIS.

"Their main concern is to occupy FSA liberated land and to kill people and activists in name of religion. They follow the same tactics of the regime, shooting at peaceful protestors in Atarab and killing 53. We consider them just as equal as the tyrant and we should fight them,” he explained.

The story of activists being arrested by ISIS is bitter.

Saif, an activist that was arrested by both the regime and ISIS for belonging to the Ahfad Al-Rasoul brigade.

“They took me to their court where the judge issued a verdict of immediate execution by knife, just because I belonged to Ahfad Al-Rasoul.

They tortured me and threaten to cut my head off. They told me they would like to see how much it weighs and that tomorrow would be the day they bare my head.”

“Then, luckily, we were freed by the FSA and taken to our families."

FSA commanders met to unite in their fight against ISIS. The Mujahedeen Army is one brigade that has joined the front.

"We began to cleanse Idleb province from ISIS," Hussein said, “starting from Bab al-Hawa to Khanseqoun.”ce

Regarding how ISIS was able to take over FSA land, Hussein said: “We thought they came to support us, then we discovered that they had come to support the regime.”

He said the FSA had amanged to free 16 prisoners arrested by ISIS.

Jamal Maarouf, the head of the Syrian Rebels Front said the front has now liberated 70% of Idleb from ISIS and that “soon we will free all of Idleb”

However in Darkoush village, an ISIS car bomb killed 50 people and in Tal Rifat, about 40 FSA soldiers were killed from the Tawhid Brigade.

ISIS took revenge for their losses on their arrested civilians and prisoners, killing them all.

In Harem, they killed 50 civilian prisoners and in Aleppo, 50 activist prisoners were also killed.

The Syrian people deserve their freedom and will get it through force. They are against injustice and will revolt against tyranny of any kind that tries to divide them using sect of religion.

Syrians don’t retreat or surrender and their right to freedom and justice will prevail. Syrians are invincible in the face of injustice.