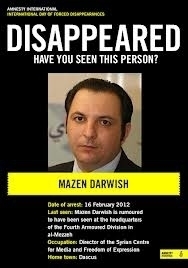 The wife of prominent Syrian activist and journalist Mazen Darwish, detained by authorities since February 2012, on Sunday appealed for his release as a "goodwill gesture" amid peace talks in Switzerland.

Her call came as Syrian government and opposition delegations in Geneva were set to discuss the fate of thousands of people missing, jailed and kidnapped since the outbreak of the conflict in March 2011.

Darwish was set to appear before a Damascus court on Monday on "terror" charges along with his colleagues Hussein Ghreir and Hani Zaitani.

"We appeal to the Syrian government to release Mazen, Hani and Hussein. I hope the authorities will see Geneva II as an opportunity for a real peaceful solution, and part of that would mean releasing people who are peaceful activists," said his wife Yara Badr, who is also a journalist.

Rights organisations have also pushed for the release of Darwish, director of the Syrian Centre for Media and Freedom of Expression, which was founded in 2004 to promote freedom of expression.

Darwish and 13 other staff members — including his wife — were arrested on February 16, 2012, when air force intelligence agents raided the SMC's office in Damascus.

Most of the others have since been freed, but Darwish, Ghreir and Zaitani were accused of "terror" charges.

"Most activists detained after March 2011 are accused of terrorism, even the most peaceful of them," said Badr.

Darwish and his colleagues, who are currently being held in Damascus' Adra jail, have been summoned to the anti-terrorism court five times before for trial, but previous sessions have been postponed.

"We hope the session will go ahead and that the charges against them are dropped, considering there is no evidence," Badr said, adding she feared Monday's sitting might be delayed as well.

In November 2013, a UN Human Rights Council's working group described the detention of the three men as "arbitrary," saying the men should be released.

The Syrian Observatory for Human Rights, a Britain- based monitoring group, estimates some 17,000 people have gone missing in the war and tens of thousands are being held in government jails.

It says thousands of others have been kidnapped by armed groups including Islamist militias.

The Observatory has described conditions in government prisons as "horrific", with overcrowding, supply shortages and outbreaks of disease.

A UN-mandated probe last month said Syrian government forces were waging a campaign of enforced disappearances to terrorize the population, amounting to a crime against humanity.