Flehan complained about lack of coordination and funding by the ACU 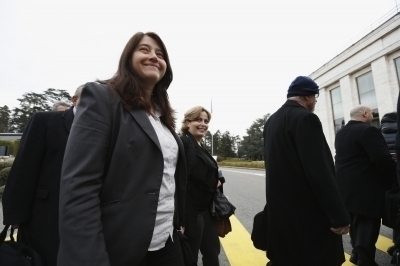 The Syrian Relief Office in Jordan has been closed over lack of coordination by the National Coalition Aid Unit,  its former director told  Zaman al-Wasl.

Rima Flehan, a prominent Syrian opposition figure, and a member of the Syrian National Coalition, said that a volunteer team formed in 2012 in Jordan after the severe snow storm that hit the country. She withdrew from the Coalition in protest for failing in its duties toward the refugees.

Flehan went on to say that Moaz Khatib, the former Syrian National Coalition leader managed to gain permission from the Jordanian government to establish a relief office run by the Coalition, and the volunteer team joined the office.

Flehan said the relief office was funded with enough money to cover the expenses of 1,500 Syrian families living inside and outside Zatari camp. However, funding stopped three months later despite being the only office providing the Coalition with detailed receipts and despite the fact its staff received the lowest wages, she added.

Flehan explained that after the funds were stopped, the office received funding from the Assistance Coordination Unit (ACU), which is run by the Coalition, and it covered the cost of 1,000 vouchers of 50 Jordanian Dinars each, and house rental for 200 Syrian families, alongside a grant of $12,000 for office expenses and employees wages.

According to Flehan, employees decided to reduce their wages to extend the range of support, and managed to cover the expenses of 1,500 families.

“Unfortunately, the ACU did not show serious commitment to the funding timetable, which caused disruption to the office’s administration. Six months later, the Unit stopped supporting the office completely, coinciding with a campaign to defame the employees at the Relief Office," Flehan said.

All that, she said, forced Flehan to resign from the office and ask that the office employees be considered as staff of the Unit, which was agreed. The ACU has not provided any support since then.