Pro-regime demonstrations have been springing up in Damascus, Homs and the coast 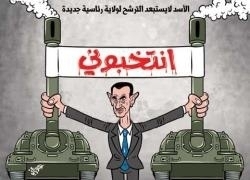 Despite requests from western governments that the presidnetial election be delayed, and despite a suggetsion from Russia for early elections under international supervision, information coming from Damascus revelas the regime has launched a campaign on security and partisan politics to nominate Assad for the next presidential election, to be held in summer.

Public sector employees have begun collecting signatures pleading for Assad to run. Meanwhile, Syrian businessman told al-Hayat that officials in the government and security forces met members of the Damascus Trade Chamber to encourage them to launch campaigns to support the nomination.

According to the current Syrian constitution, which was adopted in 2012, the presidential elections should be held two or three months before the end of the presidential term, which ends on 17 July, 2014. This constitution allows Assad to run for another two terms, with each lasting seven years.

A European ambassador in Damascus told al-Hayat that "there are three possibilities: The first is holding the elections in regime-controlled areas in Damascus, Homs and the coastal region in the west, in addition to a symbolic electoral process in regime-controlled cities in Edlib, Aleppo and Daraa; the second possibility is reaching an American-Russian compromise that includes delaying the elections for one or two years to give the chance for the political solution to succeed; the third is that Geneva negotiations may lead to a progress in the political process which includes the formation of the transitional governing body which will delay the elections for a period suitable for the transitional stage."

A Western source told al-Hayat that the American Secretary of State John Kerry asked his Russian counterpart Sergei Lavrov during their meetings in Paris and Montreaux to try to delay the elections to give a chance for Geneva II negotiations to succeed, but that Lavrov didn’t respond either positively or negatively.

Moscow has suggested the participation of opposition figures in the presidential election, which would be held under international supervision and according to the current constitution. Iranian president Hassan Rouhani says that  "Assad has the right to nominate for a new presidential term" and the opposition can also nominate its candidate.

The European ambassador explained that all the signs in Damascus indicate that the first scenario is taking place, especially after the failure of Geneva negotiations and the Russian escalation, in addition to the Western-Russian new crisis in Ukraine.

Pro-regime demonstrations are being held in the neighborhoods supporting Assad in Damascus, Homs and the coastal cities. Some of the demonstrators have raised signboards "demanding" Assad run. A European diplomat said that Hezbollah and its General Secretary Hassan Nasrallah flags were also raised alongside the official Syrian flag and photos of Assad.

An informed source said that the National Syrian Social Party (SSNP) has decided to nominate its representative in the National Progressive Front (a coalition of licensed parties) to run against Assad in the elections. Another source said that there have been some communications with the general coordinator of the National Coordination Commission for Democratic Change Forces, Hassan Abdulazim, to nominate him for the elections, but the final decision of Abdulazim is still unknown.

The diplomat noted that most of the shops in the old markets have been painted with the flags of Syrian regime. "Those who didn’t paint their shops were fined," the source added.

The director of Damascus Trade Chamber Ghassan al-Qallaa issued a statement refering to a positive reading of the situation of Syrian economy and a "development in trade and reactivation of deactivated economic activities". he also noted that the number of merchants who have paid their subscription fees has risen from 2,900 to 3,700 in a year.

A Western diplomat told al-Hayat that the group of London, which consists of 11 countries from the Friends of Syria group, is divided towards how to deal with the scenario of the elections. Washington- which wanted to reach a compromise with Moscow but failed to- refuses the idea of considering the elections a base for the political process, Washington thinks that "this will be an additional factor to deepen the geographic and political division in the country", so it seeks "the option of military escalation in the next stage, simultaneously with a campaign against these elections", while the European countries suggested "the option of ignoring the elections and accusing them of being illegitimate and were held in an unfair conditions".