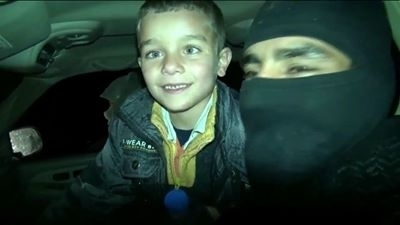 The regime media and its delegation at Geneva negotiations have continued to deny the detention of children.

When asked about the detention of children, Jaafari and Mikdad responded with mockery and said they considered the questions baseless.

The most important point on the schedule of Geneva negotiations was the release of detainees, but no progress was achieved on that front and the negotiations ended up with nothing.

Moreover, the statements from Mikdad, Jaafari and Bouthaina Shabaan about the innocence of the regime in the face of accusations of detention of children proved to be lies during the process of exchanging the nuns of Maaloula.

Osama, a nine-year-old child who appeared smiling in video clips circulated from the exchange operation was detained with his mother and four other children in regime prisons. The child appeared in the exchange operation between the Nusra Front and the regime for the release the nuns of Maaloula and 152 women and children. This proves the lies of the regime's claims about never detaining children.

Cameras, including those of channels supporting the regime such as al-Mayadeen, documented the exchange operation of the nuns near the Lebanese Army checkpoint in Arsal. The operation began with the release of a family consistin of a mother and her four children.  A Qatari delegation stated that it received the rest of Syrian female detainees, 151 women,  at al-Masnaa border checkpoint.

The tragedy inflicted on Syrian children is not new for the criminal regime. The spark of the Syrian revolution was lit when Daraa children, who wrote on the walls of their school, were then tortured by Aatif Najuib, one of Assad's security men and his cousin.

Nobody knows the exact number of children detained in regime prisons, but the U.N. has demanded the release of hundreds of children in Homs alone. Children were detained after the evacuation operation of the Old Homs neighborhood.

The irony in all this is that the nuns who appeared on regime media stressed that they feel happy because they were the reason for the release of Syrian female detainees and their children. This is the most powerful condemnation against the regime who detained women and children, broadcasted through its own media.