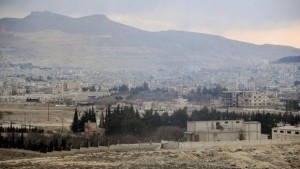 Syria said its military seized a key town that served as a rebel supply hub on the Lebanese border on Sunday after a months-long army offensive. Activists said fighting was still ongoing but the government was in effective control of much of Yabroud.

The fall of Yabroud, coming as the Syrian conflict enters fourth year, would be the latest blow to rebels since the initiative passed to the government in the spring of 2013. Support from fighters of the Iranian-backed Lebanese Shi’ite group Hezbollah appears to have tipped the balance in the border area.

Hezbollah’s alignment with President Bashar Assad has caused the conflict to bleed into eastern and northern parts of Lebanon, where 13 people were killed in Syria-related violence in recent days, 12 in urban fighting and one in a rocket attack.

Yabroud was an important supply line for rebels into Lebanon, and overlooks an important cross-country highway. It is the last major rebel-held town in the Qalamoun Mountains region, where Assad’s forces have been waging an offensive for months to try to sever routes across the porous border. Its fall would come just a week after the Syrian army seized the village of Zara, another conduit for rebels from mountainous northern Lebanon into central Syria.

“Our armed forces are now chasing the remnants of the terrorist gangs in the area,” said a uniformed soldier reading from a military statement on Syrian television.

“This new achievement, which led to a collapse of the terrorist groups, completes the successes of the army in the Qalamoun area against terrorist groups and their nests and forms an important link to secure the borders with Lebanon, and cuts supply lines and tightens the noose around terrorist strongholds remaining in the Damascus countryside,” said the soldier. Syrian officials refer to rebels as “terrorists.”

Gunfire and clashes could be heard on footage broadcast live by the Lebanon-based Al-Mayadeen. It showed troops walking through empty streets.

A black flag used by Syria’s Al-Qaida affiliate, the Al-Nusra Front, still flapped from a building near what appeared to be an abandoned rebel army post, still painted in the colors of a flag used by more mainstream rebels: green, white and black, dotted with three red stars.

Kasem Alzein, a Syrian pro-rebel doctor who lives in the nearby Lebanese border town of Arsal, said military forces entered the eastern Yabroud overnight and that rebels fled to the nearby town of Flita. He said a small hardcore group of fighters had decided to fight to the death in street-by-street clashes. Three other activists also said rebels were now trying to drag Syrian army troops into urban warfare, where they believed they had an advantage.

“They don’t want to surrender,” he said. But, he said, “supplies are cut off. The weapons that were promised [to rebels] never arrived.”

“Qusair will repeat itself,” Alzein said, referring to another strategic rebel-held town on the Syrian border that fell last summer. As in the Qalamoun offensive, Hezbollah played a key role backing government troops.

But Alzein said he hoped rebels could still find a way across the amorphous border. “They can’t close all the mountain pathways. God willing, God will open a path for us,” he said.

As the army moved into Yabroud, Syrian aircraft fired four rockets near the barren hills of the Lebanese border town of Arsal some 18 miles (30 kilometers) to the west, said its deputy mayor Ahmad Fliti.

He said it wasn’t clear why they were shelling the area, but previous attacks targeted smugglers believed to be supplying rebels.

As Syria’s war takes on increasingly sectarian tones, it has triggered violence in neighboring Lebanon, which shares a similar patchwork of minorities.

The chaotic mix of rebels fighting Assad forces are overwhelmingly Sunni, while Syria’s patchwork of minorities, including Christians, Shi’ites and Alawites have largely sided with the regime or remained neutral. Assad himself is a member of the Alawite sect, an offshoot of Shi’a Islam.

Tensions are strong in the Arsal area, home to Lebanese Sunni and Lebanese Shi’ite villages.

On Sunday, an extremist Sunni group in Syria, the Islamic State of Iraq and Syria, claimed responsibility for firing rockets at a Shi’ite-dominated town near Arsal, local media reported.

One man was killed in the town of Nabi Sheet while other rockets landed in the nearby town of Labweh on Saturday, Lebanon’s state-run news agency said.

It was the latest in a series of rocket attacks from Syria toward Shi’ite-dominated villages in Lebanon.

The Syrian war has also exacerbated tensions in the northern Lebanese city of Tripoli dating back to Lebanon’s own 1975–1990 civil war, where two impoverished neighborhoods belonging to rival sects have seen dozens of clashes.

The fighting has left 12 people dead in Tripoli since Thursday, Lebanon’s state-run news agency said. NNA says the latest fatality was a soldier, killed when attackers fired on his armored vehicle with rocket-propelled grenades and small arms on Sunday.

The clashes pit Sunni gunmen from the neighborhood of Bab Tabbaneh against rivals from nearby Jabal Mohsen, dominated by Alawites

Some Sunni gunmen have also attacked Lebanese soldiers, accusing them of loyalty to rival sectarian factions in Lebanon.