The President and his wife addressed the children of martyrs 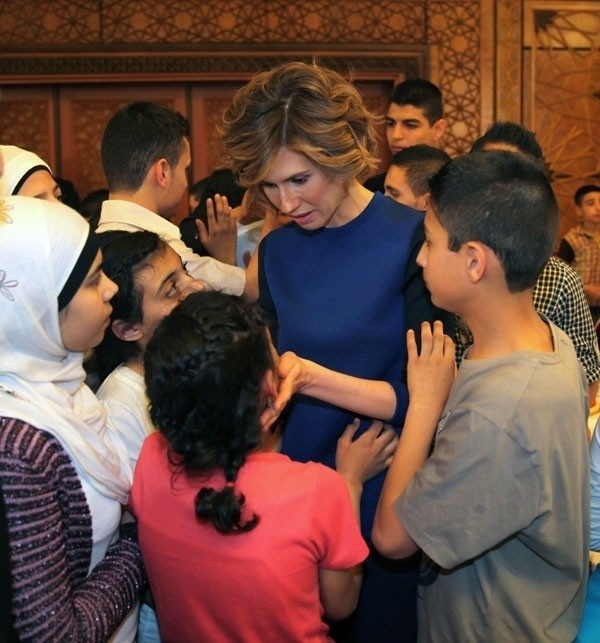 President Bashar Assad and his wife, Asma Assad on Tuesday received the sons and daughters of martyrs on the occasion of Martyrs' Day.

Assad said Martyrs' Day is a precious occasion for all Syrians, adding that they have always felt proud of those who died to protect, along with their families, our homeland.

The President told the children of the martyrs that thsy should be proud of their father who has offered his blood for the sake of the homeland and for each Syrian citizen.

"If all people were strong, firm and not intimidated like you and your families, we would certainly gain victory over terrorists," he said.

Assad concluded by saying that on the next Martyrs' Day "we will meet, God willing, not only to celebrate the occasion, but also to celebrate victory over terrorists who have perpetrated the ugliest crimes against Syrian people."

Later, the President and Mrs Assad exchanged cordial speeches with sons and daughters of the martyrs, confirming Syrians pride for their martyrs, whether they were martyred during previous stages of Syria's history or during the current war against terrorism.

The President added that families of martyrs are also a source of pride because their courage and strength are the basis of Syria's steadfastness and will be one of the most important reasons of its victory over terrorism.

The President said that if it were not for the willingness of Syrians to defend their country, and the heroic martyrs who protected the homeland, "Syria wouldn't remain and we would not be able to meet in this place and talk to each other."

For her part, Mrs Assad told the sons and daughters of martyrs that the courage of their fathers should be a motive for them to exert more effort to study and gain superiority in order to become heroes.