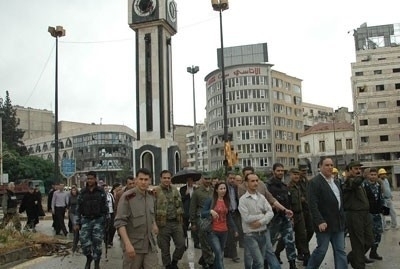 The Homs Governor Talal Barazi said on Thursday that national reconciliation and the removal of gunmen from the old city would have never born fruit without the sacrifices of army and struggle of the Syrian People.

"What has been achieved was a result of efforts that lasted for months starting with the evacuation hundreds of civilians from the Old City and settling the cases of nearly 820 gunmen who have given up and handed over their weapons to authorities," the Governor said while touring Homs city center to inspect the work of public institutions.

"Getting the gunmen out of Homs Old City will be end soon while cases of 50 gunmen were settled yesterday after they had handed over their weapons to the competent authorities. A number of adducted persons by the armed terrorist groups, among them women and children, were released," Barazi said.