The winning poster depicted a soldier smelling a flower 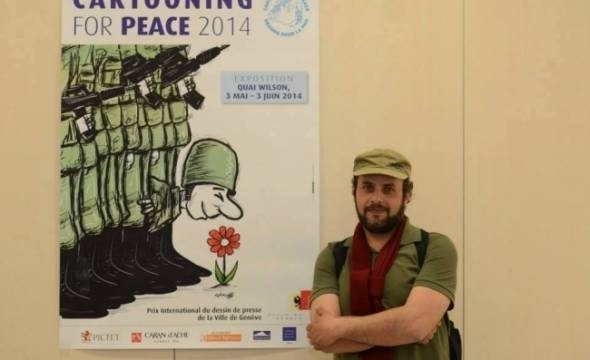 Young Syrian-Palestinian cartoonist Hani Abbas has been awarded the Press Cartoonist Award, the highest award for caricature in the world, organized by the Cartoonists for Peace Organization.

The award was established by 'Plantu', a French cartoonist, and awarded bi-annually to a cartoonist found to have courage, talent and who has shown responsibility in peace-building, forgiveness, struggle for freedom of speech and other humanitarian issues. The prize was previously awarded to an Egyptian female cartoonist Doaa al-Adl.

“A soldier smelling the freedom flower” was the theme of this year's event on  the 100th anniversary of WWI.

The cartoonist said that the prize was a "great and happy surprise".

He explained the idea behind the winning poster: "It's a call to leave aggression and aggressiveness and to inhale the smell of peace and freedom, because soldiers’ duties are to protect people not kill them, and to be with them, not against them.”

Abbas lived the war in Syria during all the very difficult times. He said he considers those times the most important period in his life and while he had to make hard decisions, he did not stop drawing to show the suffering of people and to confront death he had to witness every day.

Abbas confessed that he had some fears his work would draw punishment from the Syrian regime, like other cartoonists Ali Farzat and Akram Raslan, and confirmed he had received direct and indirect threats. However he confronted his fears and published his drawings nonetheless. He said he was proud that his position had remained the same and not been affected when he left Syria because of the danger to his life.

He revealed that he has no reason or strategy for not including commentary with his cartoons, saying he simply likes to present deep ideas anyone can understand.

The artist does not feel that the scope for freedom of speech and expression has improved significantly after the Arab Spring revolutions, because the conflict between freedom and dictation has turned into more conflicts and allies.

“We have not yet reach to a situation where a person can say his opinion whatever it was without fears of detention or killing, the revolution in Arab countries still has not provided a healthy relationship between educated people and those in power," he said.

The cartoonist expressed a deep sadness for what happened in Homs and the destruction, displacement, killing and hunger. He said Homs was let down like other cities and said he felt regret that people have paid such a heavy price to get the final result.

“Homs revolutionary songs and its martyrs’ photos, will stay in our hearts and no one can take that away from us, whatever the pressue, " he concluded.