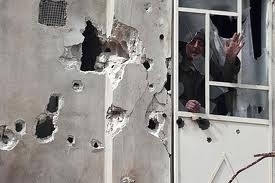 Abu Bahr, from the coastal city of Jableh, had experienced a number of bad incidents at the hands of the Syrian regime and cause dhim to hate them.

From the outset of the Syrian revolution, he participates in the demonstrations in Jableh. But when he felt unsatisfied with their pace, he decided, now more than three years ago, to pack his luggage and go to Homs to participate in a different theatre of the revolution.

Abu Bahr told Al-Hayat that when he arrived in Homs, "I felt indescribable fear".

"The first scene I saw in Homs was a soldier who was holding a machine gun and shooting randomly at shops. It was a new and scary scene for us. I tried to hide and escape, so at the end, I found myself in Bayada."

Although he departed years ago, Abu Bahr's retained many details about that day. He recalled the date, time and the names of the quarters in detail. From that moment, he said, “I declared my allegiance to the city of Homs".

Abu Bahr's identity card states that he is from Jableh, but that didn’t prevent him from becoming involved in military actions in Homs. He immediately joined a group that consisted of no more than ten members; all of them were killed during the last three years, except he and one other young man.

He became acquainted with different types of weapon that he, like many others, handled for the first time.

Abu Bahr was based in a number of different locations, and lived for a time in Khaldieh. He told al-Hayat that he and his friends were obliged to walk for more than seven hours across the sewage to go from Khaldieh to Hasawieh, which is an area in the countryside of Homs, and that they used the sewers to transfer food, diesel fuel and ammunition, before the regime discovered the route and closed it down.

Abu Bahr frequently referred to the loss of Khaldieh in the context of how it led to the siege of Old Homs. In the beginning, he said, the rebels didn’t correctly estimate the difficulty of the siege because food and ammunition were still available at the time, and they could get them through Ghouta.

Many families fled the area before the blockade, which began in June 2012. Those who remained left later under a deal mediated by the UN, so the liberated area became purely military, with only very few civilians who stayed to assist their children and fathers who were fighting with the rebels.

Abu Bahr described the little amount of food that was brought in by the UN.

"Each one of us has got a share of half a cup of rice, half a cup of bulgur and half a cup of lentils, one can of beans shared by three people and one packet of spaghetti shared by four people. It was the only time that we have got food from outside the blockade," he said.

“We became experts in all kinds of herbs. We used to boil them and add oil and all kinds of spices to them; hunger is an infidel.”

He described being forced to cook herbs even though it led to may health problems. Some  people were poisoned and died by some toxic herbs caused hallucinatory attacks that lasted 24 hours.

The battalions were not equal in the way the herbs were shared; some of them had food and grains, but each of them monopolized what they had got for their members, no matter what the situation was for other fighters. This, Abu Bahr said, caused divisions and rivalry between the battalions which stopped supporting each other in battles.

Abu Bahr descibed the incredible price of tobacco in the besieged city, where one kilo of Arabic tobacco reached up to three million Syrian Pounds. The rebels used to empty the cigarette and divide its content into two cigarettes, the price of each was 10,000 Syrian Pounds.

"Tobacco is more important than the dollar, so the question that was repeated frequently was 'How much the price of one gram of tobacco today, has it risen or fallen'," he said.

Jabhat Annusrah was formed in Homs after the siege. Its formation was religiously motivated. Unlike other areas in Syria, Jabhat Annusrah in Homs didn’t include any foreigners. The fighters from Homs  chose to name it Jabhat Annusrah as they admired the strong battles that Jabhat Annusrah combated in many Syrian areas, but did not receive any support or finance from it.

“They didn’t commit any acts in the name of religion such as the imposing veil or preventing smoking,” Abu Bahr said.

"It is very difficult to fight in besieged area without food while you haven’t enough ammunition. Death surrounds you everywhere. But in spite of this, the fighters stood more than two years in the face of all these difficulties."

“We draw our strength from being more experienced than the regime forces in how to move in these quarters of the city, in addition to the religious motivation of a lot of the fighters who defend their slogan: victory or martyrdom.”

Getting out of besieged Homs cost 75,000 Syrian Pounds. It was difficult for Abu Bahr, who lived the last three years in Homs, to make his decision to leave, he said, but his health was deteriorating. He paid the money to an officer in the regime army to secure his leave.

His travel to Turkey lasted about two weeks, during which he passed Ghouta and the countryside of Homs, reaching Al Mayadeen in Deir Ez-Zor, where he said he felt really terrified at the ISIS checkpoints. In one case, he said, they checked his identity card, saying they would kill him just because he is from Jableh, a city known for having people form the Alawite sect.

The checkpoints of Assad regime, ISIS and finally the Kurds were the key elements in his journey to Turkey, where he is now safe.