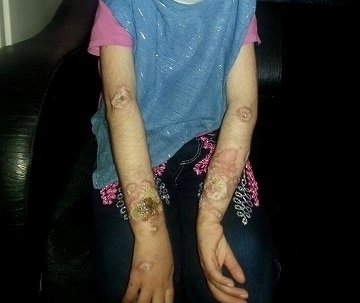 Social media activists have circulated distressing photos of an 8-year-old girl infected by leishmaniasis, saying she was a victim of human traffickers before being dumped near a Turkish hospital in a border town with Syria.

Medical sources at the Dar al-Shefa’a Hospital in Reyhanli said that Kawthar Mohamed Ezzo, from Aleppo province, was found at the hospital entrance in a terrible health condition.

Ezzo said, according to sources, that she was the victim of a gang who used her to collect donations due to her skin disease.

Activists and human rights activists called for help from anyone who could provide more details about the girl's family.