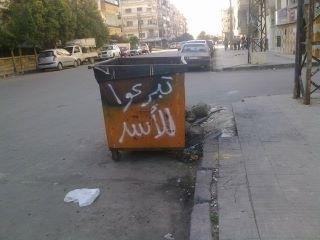 Garbage containers in the city of Aleppo and its countryside have been transformed into a cynical protest against the "blood elections" being held for the presidency in Syria.

Activists have published images on social networking sites of many of these containers – which they called "the ballot boxes for those wishing to vote in the elections" – in a number of neighborhoods controlled by the opposition in the city.

On some of the containers, they wrote in large letters and bright colors phrases mocking the elections. "Your vote to Bashar is guaranteed here," said one. "We will throw you away" siad another, mockingthe popular pro-regime phrase "We love you", and "Bashar: your place is guaranteed" was written with an arrow pointing to the container.

Residents in these neighborhoods threw trash bags in the fake ballot boxes.

The campaign, according to artist Jumaa M, who painted the containers, was born out of the massacres committed by the regime and the comical and illegitimate elections.

"The idea was that we paint a large number of garbage containers and distribute them in all the neighborhoods that fall under the control of the FSA," he said.

"In the beginning, I worked on one container and then posted the idea on my Facebook page. The idea got a lot of support and encouragement, then we began to apply it across Aleppo through al-Ilami al-Mareh team."

"We put up slogan saying 'Your vote to Bashar is guaranteed here'. Containers were distributed according to the neighborhoods… in some neighborhoods we put one container and in others we put more than one."

As for the phrases, Jumaa said: "Almost all the phrases address the head of the regime and there were some statements that addressed the other candidates (Maher al-Hajjar and Hassan al-Nouri).


Other spontaneous activities parallel to this campaign included containers with cynical scenes painted on them presented as ballot boxes in residential neighbourhoods.

"Our campaign was in fact two campaigns; the campaign of electoral containers and the campaign to vote for withdrawing the citizenship from Bashar Assad," siad Jumaa.

"On the first day of blood elections, we performed a comic play, where someone votes once, then soon he comes back wearing another dress, then trousers and a jacket to vote again and again. This is a sign for the manipulation with the electoral process in areas under the control of the regime".

Jumaa says that by the time of the elections on 3 June, Aleppo will be fully covered and Bashar Assad will win overwhelming success in Aleppo, but in garbage containers.