Power is often out for up to 16 hours a day 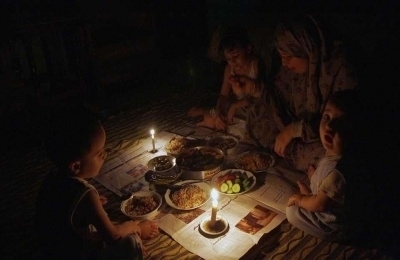 Residents of Damascus and its countryside continue to suffer from long power outages, are now arranging their daily lives and their routines around the hours of electricity cuts.

Electricity cut in the capital have reached nearly 12 hours a day, while in the nearby countryside, which is still under the control of the regime, the duration has reached 16 hours a day.

"We have forgotten all the food that needs to be cooled," said Umm Tariq, who lives in Sahat al-Qusur in downtown Damascus, explaining how she now relies on canned foods and other food items that do not need to be refrigerated because the long hours of electricity cuts have meant  refrigerated foods become spoiled.

Mrs Noor, who lives in the Jaramana area of Damascus confirmed the same thing, but also mentioned the economic losses incurred by the residents due to the fact that many families had to throw away food stored in refrigerators.

The suffering is not limited to housewives – it also extends to students, especially because this month is the month of exams at schools and universities.

One student in Damascus explained that the study environment is very difficult in terms of the difficult security situation in the capital on the one hand, and because electricity is oftem off for more than 16 hours a day on the other.

The student emphasized that there is clear indifference on the part of the regime government towards the atmosphere of exams which take place at this period of the year.

As for the economic situation in the capital, the constant cut of electricity also affected shop owners who complaining abount the inability of the government to solve the problem.

Samir, the owner of a food shop in Shaalan, said they are fed up with the promises of the government which failed to solve the problem of electricity and provide the fuel needed for it. Samir pointed out that the electricity situation is getting worse day after day and there is no hope of solving the problem.