The regime started restoring churches, while it left most mosques destroyed, to show the West that it wants Christians to return 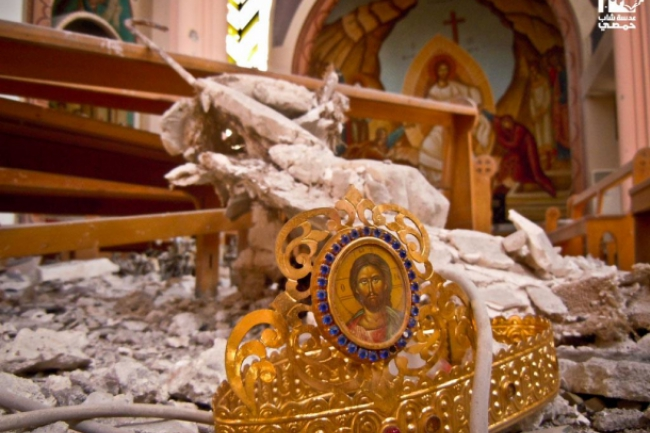 Since the beginning of the revolution, the Syrian regime has tried to encourage religious differences and stoke sectarian conflict among Syrians, to present an image to the west that it is the only protector of Christians and other minorities.

After breaking a two-year siege in Homs, especially in the Christian neighborhoods, the Syrian regime has intensified its propaganda about protecting Christians and minorities. It has relied on many religious and secular figures, particularly members of the Syrian Social Nationalist Party (SSNP), who allied with the regime because they have mutual interest and benefits.

They publish their chauvinistic thoughts and principles along with regime’s propaganda to show the west that Assad’s regime is the only guarantee for Christians’ safety.

The regime has also given orders to clean the Christian neighborhood from rubble, burned cars and runbish, and provided drinking water and reconstructed the infrastructure the Syrian Army destroyed.

Furthermore, the regime started restoring churches, while left most mosques destroyed, to show the West that it wants Christians to return. To distribute the message, the regime facilitate the arrival of many media agencies to Christian areas to support its propaganda about protecting Christians.

In fact, many Christians supported the revolution from the beginning; most remember the sincere and warm welcome and honest feeling toward the huge demonstration on 18 April 2011, when it passed-by al-Hamidiyeh street, and how demonstrators threw rice on people during martyrs’ funerals.

Commenting on the situation, Abou Elie, a Christian journalist, told Zaman al-Wasl that most Christian have been with the revolution, but they cannot openly announce that because they are minorities and fear regime’s punishment.

Bassam, a Christian young man who was granted asylum in Germany, confirmed that he supports the revolution and is convinced that a regime that kills, tortures, displaces people and destroys their houses and property, does not deserve to stay, and its only place should be before the International Court.

“The regime destroyed my house, it ordered bad people and Shabbiha from the Syrian Social Nationalist Party to steal and rob Christian houses”, he said.

Before the revolution, 80 thousand Christians lived in Homs, out of two million people. Most lived in areas like Hamidiyeh, Bostan Diwan, Wadi Assayeh, and to a lesser extent al-Mahatta, Bab Sabaa, al-Adawiyah, and al-Waer.