Attar sworn as the only vice president 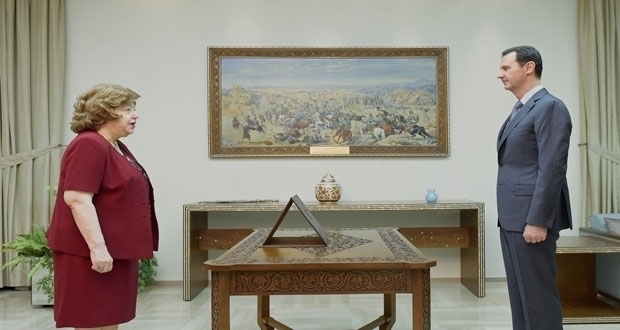 Former Vice President Farouk al-Sharaa was not invited to attended the ceremony for the swearing in of President Bashar Assad for his third term.

Najah Attar was sworn in before Assad as Vice President on Sunday.

Later, President Assad received Attar and provided her with his directions, wishing her success in her tasks.

Attar was first appointed Vice President in 2006 and she was renamed on Saturday as the new presidential term began, according to the new constitution.

In his latest interview, the former U.N. Envoy Lakhdar Brahim said that he was not allowed to meet with Sharaa during his last visit to Damascus.

Sharaa's last appearance was more than a year ago when he wrote an article in the Lebanese daily as-Safir, in which he slightly criticized the regime for refusing to find a political solution to the Syrian crisis.

It is widely believed inside Syria that Sharaa is kept under house arrest and he is not allowed to meet visitors or talk to the media.