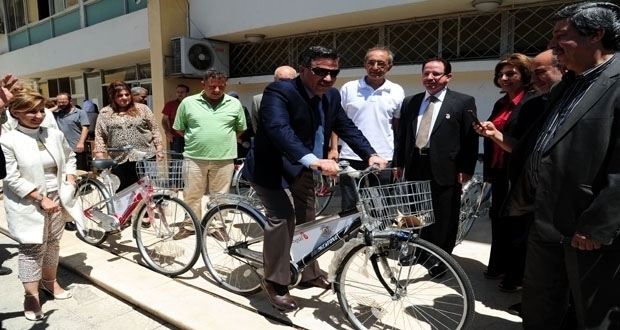 The University of Damascus, in cooperation with the Islamic al-Baraka Bank Syria, launched on Sunday the second phase of the 'Green Road for Bicycles project within the university’s campus in the Baramkeh area.

The project kicked off early last June under the Faculty of Architectural Engineering and in cooperation with the Syrian Union of Bicycles.

Rector Amer al-Mardeni explained the initiative aims at creating a bike route within the university’s campus in the Baramkeh area extending between Jamarek Square, to the university’s exit in the Halbouni area.

The objective of setting up the project, he added, is to promote bicycle riding among students, teaching and administrative staff on newly established routes.

Mardeni hailed this means of transportation as being a healthy outdoor activity and an effective way to save time in moving around, while keeping the environment clean.

He expressed hope that the project will be expanded on the level of the whole city of Damascus, which has been suffering clogged roads and long traffic jams, especially after the wave of displacement by those fleeing terrorism from the countryside and other provinces, who mostly settled inside the city.

Work is underway to complete the two remaining stages of the project.

A 1.2 km route was established in the first phase that extends among 15 educational blocks and nine administrative buildings. Students helped mark the roads and build parking lots for bikes.