There are hundreds of peaceful activists in IS prisons today 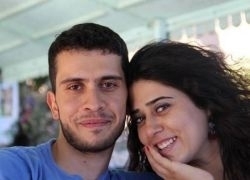 The people of Atareb in the northern countryside of Aleppo remember Samar Saleh begging masked men as they pulled her by her hair in front of her mother.

The men then put her then with her fiancee, Muhammad al-Omar, in a car and drove them to an unknown location.

The two lovers, Muhammad and Samar, were filming the children in the destroyed city; they never thought about being arrested or kidnapped, as they had just left the regime-held areas where they were arrested several times because of their revolutionary activities.

Almost all the rebels in Aleppo remember Samar as one of the first people who contributed to the humanitarian efforts, when detention was the minimum penalty. Omar, the peaceful media activist, has been famous since the outbreak of the revolution.

One year has now passed since the two lovers were kidnapped. Samar's mother says that the only news she has heard about her daughter is that they cut her hair and beat her in the first day.

Samar's father wrote on his Facebook page on the anniversary of his daughter's kidnap: "What are doing now, honey? Are they beating you or torturing you?". He addressed the IS: "Is this your caliphate and your beliefs? Did any caliph do such a thing? Did he kidnap the free women and deprived them from everything? Even a call to their parents?!".

One of the daughters is  now detained by the regime, the other by the Islamic State.

Maysa, Samar's sister, didn’t hear the news about her sister's kidnap until months later. Maysa was detained in regime's prisons when Samar was arrested by IS. She would never have heard about the news if she wasn’t released in an exchange with the Lebanese captives kidnapped in Azaz.

Maysa appears in a picture photographed by Human Rights Watch holding a signboard, saying that the world which interfered to release the Spanish journalists can interfere to release her sister."The world can really recover the smile to Samar's family," as the sign says.

"Maybe her kidnappers don’t care about the humanitarian and legal values. They are not interested in emotions and they cannot be convinced that we have the right to know if Samar is alive or not," Maysa told al-Arabiya.net.

Four months ago, in a tense argument in one of the streets of Bustan al-Qasr neighborhood in Aleppo when the mother of the activist Abu Mariam, one of revolution's symbols in Aleppo and the leader of the demonstrations in the neighborhood who was also  kidnapped by the Islamic State – insisted on organizing a funeral for her son. She insisted he was executed by IS on charges of secularity. Apparently this is what IS told her when she plead to release him, while the rebels said that Abu Mariam is not dead and it is not suitable to organize a funeral for him. They say that IS never reveals the fate of a kidnapped imprisoned in their centers.

The mother organized a symbolic funeral for her son, celebrating his martyrdom. For her it is over, she cannot wait for him anymore, or imagine the torture he is exposed to; it is more relaxing for her to think that he is dead.