Pleas to the opposition institutions have fallen on deaf ears 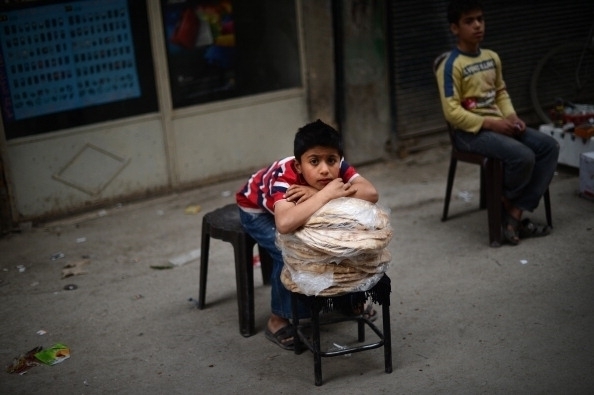 As the bitter conflict in Syria continues, it comes as no surprise that in addition to an ongoing bread crisis in Talbiseh, a new health crisis has emerged due to the lack of medicine.

According to the representative of the local council and field hospital in Talbiseh, Abdulrazzaq Abu Mahmoud, the town is experiencing the worst conditions since the outbreak of the Syrian revolution in 2011.

According to sources inside Talbiseh, the bread crisis has overshadowed the town and its surroundings in the countryside of Homs for more than a month.

The suffering has forced 70,000 people to issue a plea the world to provide them with their “stale bread”, after their calls for help fell on deaf ears among institutions of opposition, the Syrian National Coalition, or the Interim Government. They were given promises and decisions that turned out to be mere ink on paper.

All the town's desperate calls were fruitless and they couldn’t make the world or the opposition understand their agony and hunger. Therefore, a delegation from the town went to the headquarters of the coalition and the Interim Government, enduring the dangers and hardships on the road, hoping for a rescue line since permanent solutions are out of reach in the meantime.

Nasser and Rajoub, two sheikhs who have just arrived from Talbiseh, explained the crisis to Zaman Al-Wasl, revealing that the local council has submitted a project to provide a mill, and despite approving it, the Interim Government is yet to finance the project. The rescue solution was to get $48,000 from the Assistance Coordination Unit (ACU), and after forming a committee to buy the mill in an area near Talbiseh, were shocked to know that the price of the mill is $65,000 and the electricity generator $9,000. The whole project has been suspended without reaching a definitive agreement until now.

The bread crisis even included the necessary raw materials for making bread, especially water, fuel oil, yeast and even salt which has also become extremely difficult to obtain, reaching 150 Syrian Pounds for a kilogram.

To make matters worse, the area has suffered from drought which affected the farming season with a decline of 80% on last year's season, and with a 42 km length of war front with the regime, the people who work in farming did not have access to 50% of their land because it is under regime fire.

According to the two sheikhs, people now buy drinking water from the tanks, at a price of 700 Syrian Pounds ($3.5) for a tank of five barrels of water, not enough for a middle-class family for more than one day.

While the opposition, Interim Government and the Coalition only respond with promises to address the issue with the international organizations, the chairman warned: “If what happened in Homs is repeated in Talbiseh, then it will be the opposition’s responsibility to bear."

Abdul Ilah al-Fahd, a member in the local council in Homs revealed the council informed the Interim Government, at the highest levels, and made them aware of the bread and flour crisis in Talbiseh and other besieged areas in general. But "negligence and the government’s indifference have hindered any effort to prevent the famine that had befallen our families,” he said.

After two months delay, only $130,000 has been allocated to this matter, an amount not enough for one town in the countryside of Homs.

The council believes that its project is the most appropriate to make the families deeply rooted in the liberated areas and keep them removed from regime’ settlements, which are paved by Assad starvation and blockade, and that the council can contribute in eliminating sedition and problems resulting from the famine, as stated in the text of the project.

The project covers the population of about 400,000 people in the besieged areas to the north and north-west of Homs and Waar, and because the project, which costs more than $500,000, is a rescue solution, the time allocated to it is one month, but it can be renewed for another month if the General Institution of Wheat hasn’t completed its strategic stockpile, as it promised then to buy the wheat, grind and distribute it to the furnaces.

Correspondences show that the decision number 27/4 dated 6 August has been issued to allocate $100,000 to buy flour for the besieged areas as a rescue solution, but a plea letter from the Local Council of Homs to the President of the Coalition on 17 August reveals that the Interim Government decided not to give any amount for the northern and western countryside of Homs or to Waar, pointing out that the amount of $100,000 was given to the local council to buy wheat and sell it to the people who do not have money to buy flour.

The Council asked the Coalition to clarify the possibility of mediation with the government to provide $1,000,000, which is the need of the besieged areas.