The group was reportedly engaged in plans to attack the U.S. 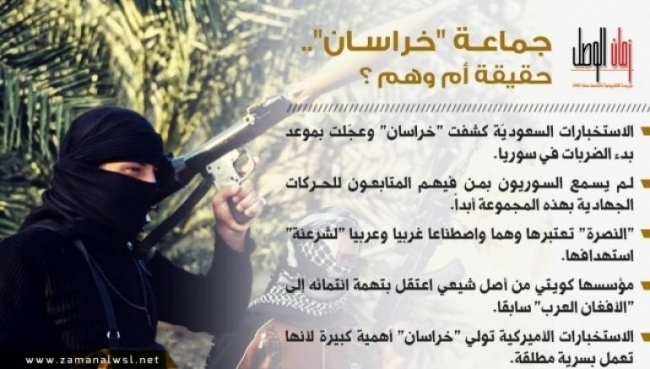 Out of the blue, in the middle of the inflamed Syrian scene, a group called Khorasan emerged.

Following U.S.-led airstrikes on Syria, reports, confirmed by the American Congress, revealed they had targeted Islamic State (IS) and the Nusra Front, as well as eliminating the "Khorasan group", apparently led by Kuwaiti Mohsen al-Fadhili.

Before that, no one in Syria had heard of that group — even those following the jihadist movements. Moreover, it was not on the frequently updated American list of terrorist groups.

Many Western and Arabic intelligence reports mentioned that a “terrorist group” based in Syria was getting ready to attack the U.S. using explosives made of non-metal materials, which make discovering it difficult via recent security methods used in airports. Since then, the U.S. increased security methods in airports and airplanes coming from the Arab and European countries, expecting recruited European nationals to perform the operation.

The reports and speculation coincided with surprising statements from Saudi King Abdullah bin Abdul Aziz Al- Saud during his speech at ceremonies for receiving credentials of new ambassadors on 30 August, 2014.

He said that terrorism would hit Europe within a month and the U.S. within two months from the time of his speech.

Analysis of the events suggests it was Saudi Intelligence which discovered the Khorasan group, and that King Abdullah’s statements, based on their reports, made Syria the priority for U.S. President Barack Obama, hastening the date of strikes despite the weak alliance which practically consists of only three countries, Saudi Arabia, the U.S. and France.

Furthermore, Fadhili’s background points to a Saudi intelligence role in finding out his plans to attack the U.S. He was born in 1981, to a Shiite family, but converted to Sunnism and joined Al-Qaeda.

He was imprisoned in Saudi Arabia earlier last decade under accusations he was a member of the "Arabic Afghans" group, and was later released.

He was again wanted by Saudi and Kuwaiti intelligence because of his plans to target America including American military bases in Kuwait.

American intelligence has concentrated on Fadhili’s plans and activities. The New York Times newspaper reported on 24 September that Fadhili reached Syria in 2013 from Pakistan, to start founding a cell in Syria to perform attacks on Europe and the U.S.

American Intelligence gives this group special interest because they do not like appearing on media, or publishing their activities and operations on the Internet. It has no social media account and intelligence revealed that the group has performed no activities against the Syrian regime or the Islamic State. Its main interest is to improve its members’ fighting and intelligence skills and experience and to develop new tools able to breach the security procedures in U.S. and Europe.

On the other hand, the Nusra Front and Al-Qaeda deny any existence of the Khorasan group in Syria and consider the idea nothing more than an illusion or Western-Arabic excuses to justify attacks against the Nusra Front.

Balancing both contradicting stories, it seems that Khorasan most likely does exist in Syria, but not necessarily under that name, and it is not important.