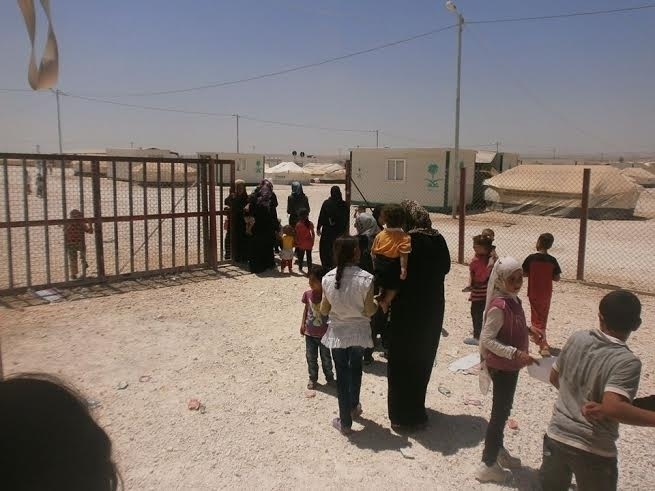 More than 100,000 Syrian refugees live in tragic conditions in Zaatari camp in a desert spot located to the far east and north-east of Mafraq Governorate of Jordan.

Refugees in Zaatari camp receive a food coupon worth 10 Jordanian Dinars (approximately 15 US Dollars) once every 15 days to fill his needs throughout a specified period.

The rate is one dollar per day, but this could easily be decreased at any moment. The refugee picks up a food coupon to begin the bitter journey to the center where coupons are exchanged for food, which can take 24 hours or more.

This is unike the previous situation, when many supermarkets selling food were available in the camp. Refugees could go to any of them to exchange their coupons for the necessary food and other materials. However a decision to close all those centers (labeled by the refugees as "malls") was recently issued.

The distribution of food aid from the World Food Program was limited to only two centers, which led refugees to abandon their families for a whole day or for long hours waiting in line to get food for their children.

Umm Khaled ar-Radi is a Syrian refugee from Daraa. She has four children living with her in the camp, while her husband remained in Syria to fight the regime of Bashar Assad. Umm Khalid is obliged to leave her children and go to stand in the queue in front of the Qatari "mall", located in the Qatari section of camp Zaatari for long hours to get food.


Umm Khalid said she is surprised by the closure of many shops that existed previously.

"I swear it is a tragedy, they are besieging us from all sides, I walk a distance of no less than three kilometers to exchange my coupons. I live near the entrance of the camp and I have to go to its end, and there is no means of transportation. You can rent a car and pay him two dinars (500 Syrian Pounds) in order to get to the place. The total value of the coupon is ten dinars which is already not enough to buy food and drink and towels for my children. We complain to Allah only," she told All4Syria.

Meanwhile Abu Salim, a refugee from Otaiba in Damascus Countryside says that two malls selling food to more than 100,000 Syrian refugees living in the camp is "exhausting for people".

"Where is the Office of the United Nations that claims humanity? Can't they see our suffering and the suffering of our women and children every day? We eat our food while we feel the misery and bitterness of our living. They come to us in their SUVs and look at us from behind their windows while wearing their solar black glasses so as not to see our bitter lives," he complained.

Hind Saber, a refugee from Homs, appealed to the Commission to intervene and open more malls so that Syrians could secure their needs.

Abu Rafat, a former shopkeeper in Zaatari whose shop was closed by the decision of the authorities, said he used to exchange the coupons in the malls scattered throughout the camp.

"You could go to any nearby mall and get what you need. They closed all the malls without telling us the reasons. The prices were within reasonable limits, but the prices in the newly-opened malls do not differ from the previous ones. What is the purpose? We really do not know," he said.

Camp Zaatari now houses two centers selling food, one of them is located in the Qatari Section, northeast of the camp, and the other is located to the west of the camp in a region called "the Provisions Center". The distance between the north and south of the camp is around three kilometers, and the majority of refugees are forced to walk it to get their daily bread.