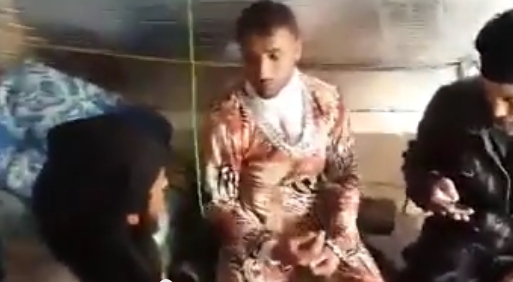 Activists have broadcast on social networking sites pictures and a video clip of the investigation of a soldier with the regime army dressed like a woman to try to flee the jihadists after they took control over the Hamidiyah and Wadi al-Deif camps.

This is just one of the antics that took place after the rebels took control of large areas in the southern countryside of Idleb.

"After Assad's troops lost their major stronghold in Idleb, they would do anything to escape death, especially since the battle resulted in killing and wounding dozens of them," activists said.

A member in the information office of Ahrar al-Sham movement, Abou al-Yazid tweeted about another soldier disguised like a jihadist, trying to convince the them that he is one of them.

"When the jihadists started to collect the loot, one of regime fighters tried to disguise himself, taking advantage of the length of his beard.  It seems he expected it would convince the rebels that he is one of them. In fact, he helped with looting the ammunition, but his long moustache allowed the jihadists discover the trick," Yazid tweeted.

Yazid also said in another tweet that among the prisoners who were detained by Ahrar al-Sham was Raed Nadeem, the Political Guidance Officer from Hamidiyah and Wadi al-Deif camps.

Regarding the details of the camps battle, the military spokesman of Ahrar al-Sham, Hossam Abou Baker, said that there was a military coordination between the movement and the Nusra Front for 10 days before the beginning of the battle. Nusra carried out the liberation of Wadi al-Deif camp, while Ahrar al-Sham took control over Ain Qurei, Tal Bansra, Bseida and Maar Hattat barriers, in addition to Hamidiyah camp.

"The battle lasted for 36 hours, and  approximately 400 fighters from regime forces were killed, 100 were captured, and dozens of tanks and vehicles were either destroyed or seized," Yazid said.