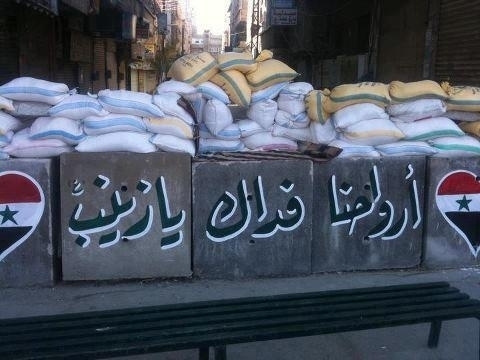 After torturing, killing and displacing the local inhabitants, Iran's mercenaries from Lebanon, Iraq and Afghanistan, expanded their settlements toward areas surrounding as-Sayeda Zainab district, under the pretext of establishing a "safe-zone" to protect and secure the district’s holy shrine.

Former Dean of the Faculty of Media at the University of Damascus, Dr. Yahya al-Aridi, commented on the incident saying the “relationship between Hassan Nasrallah and the Syrian shrine of as-Sayeda Zainab is no more than the relationship between any Syrian Muslim with a mosque in Indonesia.

“Since the morning, the gangs and mercenaries of Hezbollah have been blowing up houses in the town of al-Thiabiyah, south of Damascus under the pretext of establishing a buffer zone to protect as-Sayeda Zainab shrine. As if the ‘heroes of resistance’ are unaware most of the population are either Palestinian or displaced people from the Golan", Aridi said.

Shelling of these areas continues by Shiite militias, who support regime forces in southern Damascus, despite an armistice agreement concluded at the beginning of 2015 between rebel forces and the regime in Beit Sahem and Bibila.

A Siraj Press reporter said that Iraqi militias stationed in the vicinity of the town of Beit Sahem also do not recognize the truce, shelling the town several times in order to provoke the rebels in hopes regime forces would assist in ‘cleansing’ as-Sayeda Zainab – located between Damascus and the international airport – an area Iran seeks to secure as a settlement for Shiite families.

Iranian sectarian militias who work to secure Tehran’s interests work independently from the regime army, exercising full control over as-Sayeda Zainab and its surroundings, even operating prisons and detention centers. Better armed than regime forces, weapons and special ammunition are delivered weekly from Iran to Damascus International Airport, and on from there to as-Sayeda Zainab. These forces continue to use these areas as a base as they expand into neighboring regions south of Damascus.