“The United States is particularly concerned about the continued catastrophe that is unfolding in Syria where nearly three-quarters of the entire country are displaced people,” Kerry said 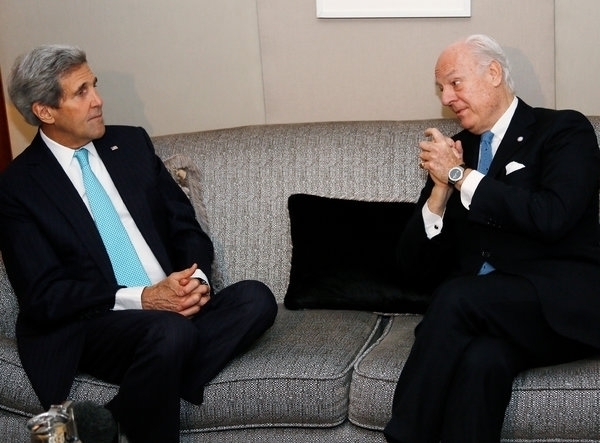 Kerry, who is in Geneva for discussions with his Iranian counterpart to accelerate a deal on reining in Tehran’s nuclear program, met with UN peace envoy Staffan de Mistura for talks on the Syrian crisis and lauded his efforts.

“The United States is particularly concerned about the continued catastrophe that is unfolding in Syria where nearly three-quarters of the entire country are displaced people,” Kerry said.

He said de Mistura was “engaged in a very complicated but very important effort to try to move the process of Syria” starting with Aleppo, the country’s former economic hub, which has been ravaged by fighting since mid-2012.

Russia, a key ally of Syrian President Bashar al-Assad, has been trying to relaunch peace talks involving de Mistura that would include meetings between representatives of the regime and the fractured opposition.

It invited 28 opposition figures, including individual members of the internationally-recognised Syrian National Coalition, as well the opposition leaders tolerated by Assad.

But several leading opposition figures, apparently doubting Moscow’s credibility as a mediator, said they would not attend.

“It is time for the Assad regime to put their people first and to think about the consequences of their actions which are attracting more and more terrorists to Syria,” Kerry said.

Kerry said de Mistura was “headed to Damascus next week”, adding: “This issue still remains very much on our front burner.”

“Those who decide not to take part in this event, they will lose in terms of their positions in the peace talks process as a whole,” Lavrov told a news conference.

In rejecting the invitation to Moscow, the Syrian National Coalition said on January 7 it would sit down to talks only if they would lead to Assad giving up power.

Moscow says the emphasis should instead be on fighting Islamist militants and that Assad’s exit should not be a precondition to peace talks that stalled early last year.