Following international condemnation of the burning of a Jordanian pilot by ISIS, a new report details the widespread actions of pro-Assad forces in the burning of Syrian civilians 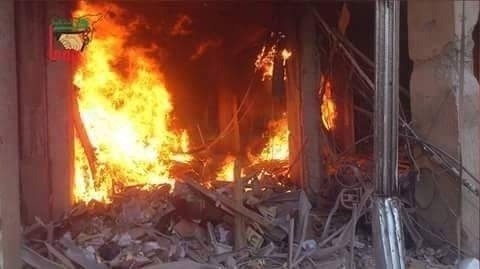 The Euro-Mediterranean Observatory and the Syrian Human Rights Network have issued a report on the burning of Syrians by the regime and its militias since the outbreak of the revolution until February 2015.

The report reveals Assad forces have burned more than 82 people alive including 47 civilians, among them 18 children and seven women, also burning up to 773 people after killing them, including 146 women and 69 children.

The report states that the bodies of 22 people killed under torture were burned, and that the names, time and place of the burning were documented by the Syrian Human Rights Network.

The report states that the strategy of burning people alive was adopted by pro-Assad militias and mercenaries since the outbreak of the revolution in 2011, and continues to this day.

The report cites the most prominent crimes committed by the regime and its sectarian militia. The city of Hama has seen the largest number of cases, with the regime burning 38 people from the city, including one child. On January 28, 2012, pro-Assad shabeeha burned four members of the same family to death (three children and a woman) inside their home in the gold market area in Lattakia. In the same year, pro-Assad militias burned three people in the Jura neighborhood of Deir-ez-Zor by throwing them into a furnace.

In one case in the city of Beida, Tartous, shabeeha reportedly executed Osama Fattouh, later burning his wife and children by setting fire to their house while still inside. In September 2012, Assad forces stormed Masha al-Arbaein neighborhood in Hama after shelling it with tanks and heavy weapons. The shelling was followed by the arrest of a number of young men from the neighborhood. According to the report, they were gathered in a house and burned alive.

The Syrian Network recorded the death of nine people in an incident, including a child, Hamza Kinan, where pro-Assad militias removed his limbs before throwing him alive into the fire.

The authors of the report condemned the indifference shown by the international community towards these crimes, while they focused instead on the actions of the highly-publicised ISIS atrocities.