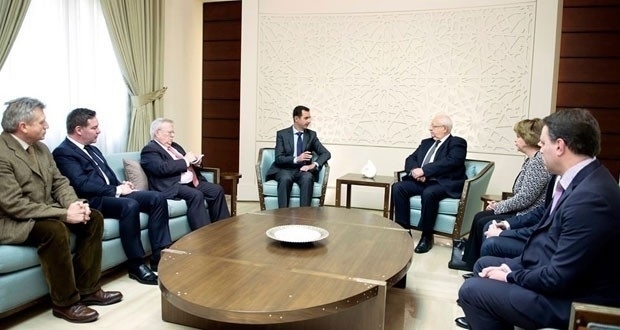 President Bashar al-Assad stressed that fighting terrorism demands real political will and a conviction that the outcome will be in the interest of all as the dangers threaten everyone.

“If this issue could be tackled based on that principle, surely we will have tangible positive results more quickly,” added the president, speaking during a meeting with a French delegation headed by Senate member, Head of the Senate’s French-Syrian Friendship Committee Jean-Pierre Vial.

Based on that logic, he said, Syria has always encouraged cooperation among countries considering that such cooperation is the most effective way to hold back terrorism and eventually eliminate it.

The president made it clear that Syria has always been committed to developing and boosting relations with other countries on the basis of respecting sovereignty, non-interference in internal affairs and maintaining common interests.

He stressed the significant role that parliamentarians could play in rationalizing government policies in a way that allows realizing the peoples’ interests.

Talks during the meeting, which were marked by frankness and openness, touched upon Syrian-French relations and the developments and challenges facing the Arab and European regions, especially with regard to terrorism.

The French delegation voiced their belief in the necessity of joint work in the various fields in the best interest of the people of Syria and France.

It is in France’s best interest to have security and stability consolidated in the region and to cooperate with Syria to curb terrorism, which has come to pose a threat to Europe too, not only the people of the Middle East region, the delegation added.

They conveyed the desire of many French parliamentarians to visit Syria to become familiarized with the situation in order to effectively convey its reality to the French people.

The French delegation stressed the importance of coordination and information exchange between Syria and France in issues of mutual interest.

The visiting delegation included Jacques Myard, a member of the National Assembly of France, deputy chairman of the Assembly’s French-Syrian Friendship Committee and Mayor of Maisone-Laffitte city and François Zocchetto, member of the Senate and Mayor of Laval city, General Inspector at the French Defense Ministry and Security Advisor at the French Embassy in Beirut.

The French delegation also met Speaker of People’s Assembly Mohamad Jihad Laham, where talks were focused on enhancing relations and dialogue among parliamentarians for the interest of stability and joint interests.