Consultations begin in Geneva between the UN envoy and Syrian government and opposition parties in an attempt to resolve the ongoing crisis, with some observers skeptical about the outcome 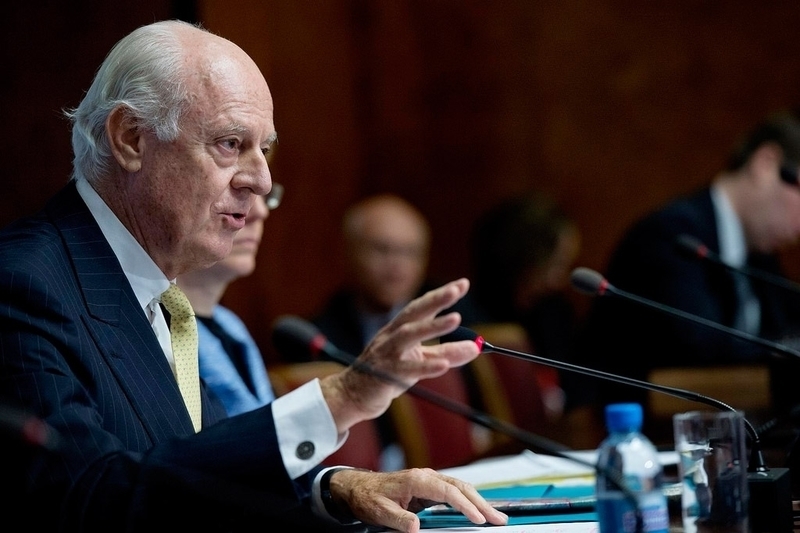 UN Special Envoy to Syria Staffan de Mistura commenced talks with Syrian government and opposition figures on Monday in an attempt to resume negotiations to resolve the four-year-old crisis, as the international community pushes to deliver the Assad regime to the Geneva III negotiating table.

De Mistura will meet dozens of Syrian figures, parties and bodies from the regime and the opposition – in addition to civil, military and political bodies – for six weeks. Initial indications do not encourage optimism in realizing a political solution, as conflicting interests continue between regional and international countries concerned with the Syrian crisis. The Assad regime and the opposition both believe each will be successful in resolving the crisis militarily, hence their apathy towards the need for “free political concessions".

Dr. Safwan Salman, member of the Supreme Council of the Syrian Social Nationalist Party (a regime ally), told Deutsche Presse-Agentur (DPA): "the new consultative episode of Syrian negotiations in Geneva comes while the conflict on the ground intensifies without any indication of its ability to produce solutions. The only new factor in this round is the official invitation of the Iranian side within the context of its agreement with the West on its nuclear program. We can add the absence of a clear US vision of the fate of the Syrian issue, and the clash between foreign and regional parties in the Syrian issue".

International parties are involved in the consultations, especially the countries concerned directly with the Syrian conflict, in addition to many foreign and Arab diplomats.

"Though these consultations are necessary, they are less important than the weight given to them in the media. The views of most of the invitees are known, and they are not going to resolve the crisis, the real negotiations are taking place somewhere else”, Dr. Rim Turkmani told DPA. “My participation comes to activate the role of civil society in the process, a role played in a systematic way and through clear mechanisms to allow wider participation, unlike the participation we see now – just a few independent figures to consult individually", she added.

Former member of the Syrian National Coalition, Dr. Walid al-Bunni, told DPA: "I will participate as an independent figure, but I do not mind the formation of a group if we agreed on a common position towards the required role of the United Nations to impose a political solution in Syria in accordance with the principles of Geneva I, which explicitly recognizes the formation of a governing body with full executive powers, not a national united government ruled by Assad, as his supporters would like to comprehend.”

“ These consultations will not result in anything, and De Mistura does not have any plan to work on. I will just seek, with some colleagues, to deliver a message to the United Nations about our vision for a political solution in Syria", Bunni added.