Geneva meetings do not constitute a conference and are not expected to produce any major announcements, says the UN special envoy 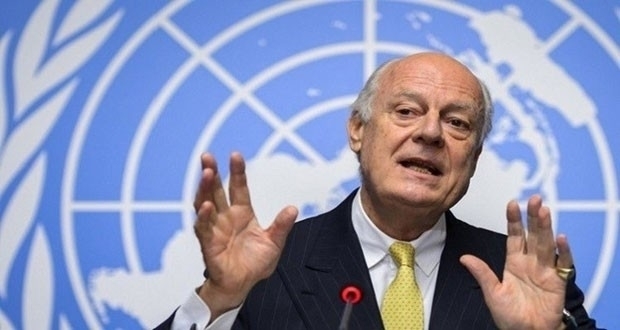 UN Special Envoy for Syria Staffan de Mistura explained the talks which began in Geneva on Tuesday are consultations, not peace talks, and that a delegation from the Syrian government was invited to attend, along with 40 Syrian and 20 international representatives.

In a press conference on Tuesday, De Mistura stressed the need to exert all possible efforts to resolve the crisis in Syria, adding that the results of the meetings will be evaluated by the end of June.

The UN envoy noted that the situation on the ground has not changed since Geneva I, but new opposition forces – like ISIS – have entered the conflict.

Regarding his proposal to ‘freeze’ fighting in devastated city of Aleppo, the envoy said that the plan did not succeed because the circumstances were not suitable, but declared the issue remained on the table.

De Mistura said that recent consultations in Moscow and Cairo were beneficial to reaching a political process, and that discussions must be held with all Syrian and international sides with the involvement of civil society organizations.

He also stressed that the Geneva meetings do not constitute a conference or Geneva III, stating the talks have no beginning, middle, or end, and are not expected to produce any major final announcements. However, these meetings constitute close talks with all relevant sides to discuss the crisis in Syria to lay the groundwork for a future solution.

De Mistura asserted that the effort is serious and painstaking and will occasionally produce achievements, adding that more invitations may be sent to other parties to attend the talks in order to engage as many sides as possible.

The consultations commenced on Tuesday, with De Mistura holding separate talks with different sides at the United Nations headquarters in Geneva, with only the UN media team given permission to photograph and capture footage. The preliminary stage of the consultations is expected to last five to six weeks.