Boroujerdi affirms “no limits” to Tehran’s cooperation with Damascus and its rendering of support, as “the front of resistance is one unified entity” 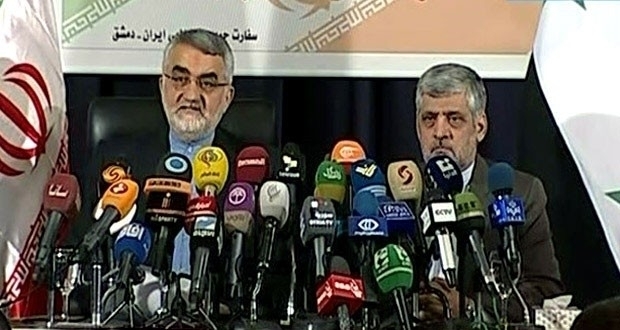 Iran has vowed “constant” and “unlimited” support for Syria, stressing its confidence in the ability of the Syrian people and army to defeat aggression targeting the country.

“We came to Syria to stress once again that our support for Syria – its government and people ­– is consistent and enduring support, and we are proud of this support for a resistance that stands up to the criminal Zionist entity”, Alaedin Boroujerdi, Chairman of the Iranian Shura Council’s Committee for Foreign Policy and National Security, told a press conference at the end of a visit to Syria on Thursday.

Boroujerdi said those countries that are today spending billions of dollars in their fight against Syria are the same who have stood against Iran, drawing parallels between the propaganda and lies with which the enemies have targeted the people of Iran and Syria.

However, the Iranian official stressed the Syrian people are not buying any of these fabrications, claiming: “everybody knows that the people of [Syria] are smart and aware enough not to be deceived by such games.”

Boroujerdi affirmed there are “no limits” to Tehran’s cooperation with Damascus and its rendering of support since “the front of resistance is one unified entity”.

“Iran has made these steps in all circumstances, notwithstanding the various forms of embargo and boycott against Syria because Syria represents the pivot of the resistance”, said Boroujerdi.

The resistance, he added, will continue standing and remain firm so long as the Zionist entity exists, citing the obvious support provided by Israel to terrorist organizations operating inside Syria.

Boroujerdi reiterated Iran’s stance that the US is making a “strategic mistake” by providing training to terrorists whom it calls “moderate opposition” in Turkey and Jordan.

He reaffirmed that a solution to the crisis in Syria must be a political and intra-Syrian one, stressing that foreign interference and decision-making from outside the border is futile.

Boroujerdi cited an urgent need for consultations with the speakers of parliaments friendly to Syria in order to address fighting terrorism, revealing that Iran is making efforts to plan such a meeting.

The Iranian official also took a swipe at Saudi Arabia, saying the Gulf state has become the driving force of aggression and criminality targeting the Islamic nation and the Arab world.

Boroujerdi also criticized Qatar and Turkey for acting as tools to implement US and Israeli policies.