Masked informants are now deployed to identify residents at military checkpoints in the capital, activist says 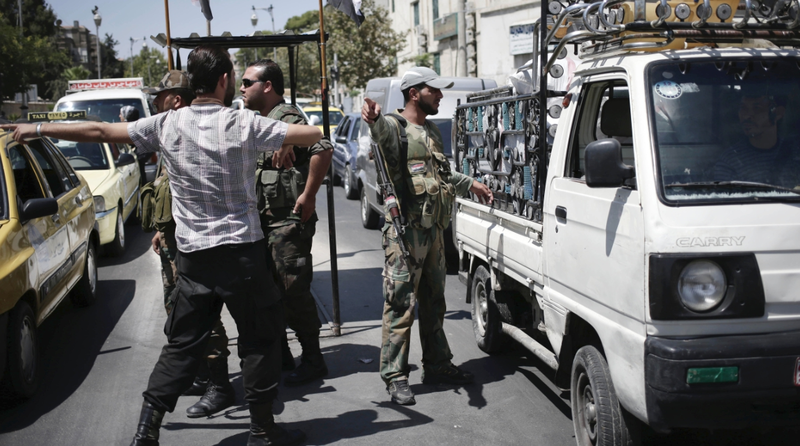 Security tensions increased in Damascus after opposition factions seized large areas in the north of Syria, such as Idleb and Jisr al-Shughour, as well as territory in the south, leading the regime to tighten security measures in the capital.

Regime forces intensified security measures on Damascus residents and activists, especially on workers in the distribution of subsidies for the poor, with many now afraid to cross military checkpoints due to targeted arrests.

Local sources claim the regime now uses masked men deployed on the checkpoints in the city.

Activist ‘Hanadi’ says she was "surprised when she saw a masked man dressed in black at a checkpoint in Barzeh neighborhood last week. When the cars stop at the checkpoint, this person would check the faces of the passengers and take their identity cards. When he identifies someone, he just nods, without saying a word".  Hanadi believes what other Damascus residents also think; the regime uses informants from within the neighborhoods of the capital. Such informants are familiar with the lives and secrets of people in their community, as they know which of the residents were a gunman in the past – or is still fighting secretly – and they know who works in relief or transfers medical supplies.

"A few days ago, they took a young man off a micro-bus and ordered the driver to leave. The young man was taken to an unknown destination", Hanadi added.

The activist said the arrests affect even those who have no direct or indirect relation to the revolution, often targeting relatives of people who supported the revolution.

Hanadi added that all informants escaped the neighborhoods of Damascus when the opposition seized them, but returned after a number of neighborhoods reached a truce with the regime.

Arrests continue throughout Damascus, often with the assistance of Iranian militias, as the Assad regime attempts to tighten its grip around the capital to prevent the formation of an armed opposition, and to restrict any peaceful movement in the city.