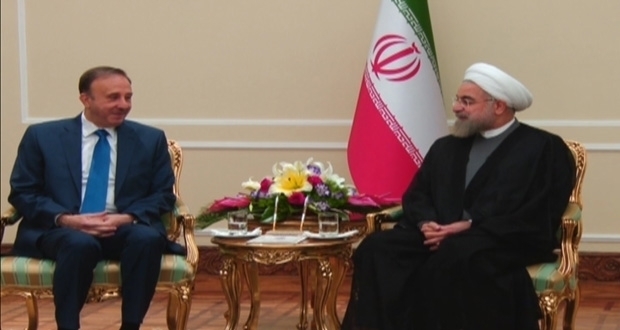 Iranian President Hassan Rouhani met with the Speaker of the Syrian People’s Assembly Mohammad Jihad al-Laham in Tehran on Tuesday.

Emphasizing a desire to build stronger relations between Syria and Iran, Rouhani reiterated that strategic ties between the two countries are being enhanced at a rapid pace.

Rouhani vowed that the Iranian government and people would continue to stand by Syria in the face of the terrorist war waged against it until the threat is eliminated.

“Those who imposed the terrorist war on Syria were expecting to achieve their objectives within months, but today after more than four and half years of steadfastness and resistance of the Syrian people, the sponsors of the scheme are frustrated”, the Iranian president said, expressing confidence that Syria will triumph over terrorism.

Laham reiterated Syria’s determination to continue fighting terrorism and the terrorist ideology until uprooting them from all Syrian territories.

Meeting with Laham later in the day, Shamkhani criticized the absence of a “serious will” to combat terrorism, warning of the threat posed to international peace and security by the cross-border terrorism inside Syria.

Shamkhani also said that Iran continues to support the Syrian people, stressing that Syria’s sovereignty should be respected and that interference in the internal affairs of the country should not be permitted.

The secretary voiced confidence that Syria, having resisted and stood its ground for over four years, will eventually achieve its victory.

Earlier on Monday, Ali Akbar Velayati, an advisor to Iran’s Supreme Leader, met with Laham, stating that Syria is on the front line as it faces foreign-backed terrorists which aim to undermine and weaken the Axis of Resistance.